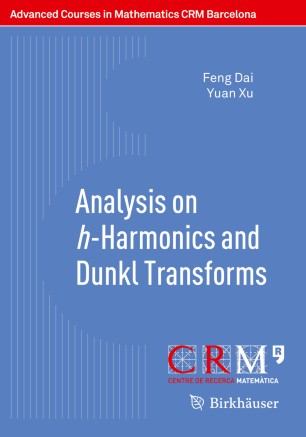 Analysis on h-Harmonics and Dunkl Transforms

As a unique case in this Advanced Courses book series, the authors have jointly written this introduction to h-harmonics and Dunkl transforms. These are extensions of the ordinary spherical harmonics and Fourier transforms, in which the usual Lebesgue measure is replaced by a reflection-invariant weighted measure.

The theory, originally introduced by C. Dunkl, has been expanded on by many authors over the last 20 years. These notes provide an overview of what has been developed so far. The first chapter gives a brief recount of the basics of ordinary spherical harmonics and the Fourier transform. The Dunkl operators, the intertwining operators between partial derivatives and the Dunkl operators are introduced and discussed in the second chapter. The next three chapters are devoted to analysis on the sphere, and the final two chapters to the Dunkl transform.

The authors’ focus is on the analysis side of both h-harmonics and Dunkl transforms. The need for background knowledge on reflection groups is kept to a bare minimum.