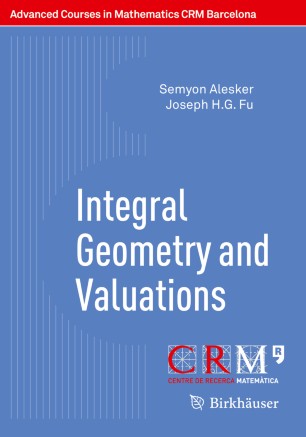 Valuations are finitely additive functionals on the space of convex bodies. Their study has become a central subject in convexity theory, with fundamental applications to integral geometry. In the last years there has been significant progress in the theory of valuations, which in turn has led to important achievements in integral geometry. This book originated from two courses delivered by the authors at the CRM and provides a self-contained introduction to these topics, covering most of the recent advances.

The first part, by Semyon Alesker, is devoted to the theory of convex valuations, with emphasis on the latest developments. A special focus is put on the new fundamental structures of the space of valuations discovered after Alesker's irreducibility theorem. Moreover, the author describes the newly developed theory of valuations on manifolds.

In the second part, Joseph H. G. Fu gives a modern introduction to integral geometry in the sense of Blaschke and Santaló, based on the notions and tools presented in the first part. At the core of this approach lies the close relationship between kinematic formulas and Alesker's product of valuations. This original viewpoint not only enlightens the classical integral geometry of Euclidean space, it has also produced previously unreachable results, such as the explicit computation of kinematic formulas in Hermitian spaces.