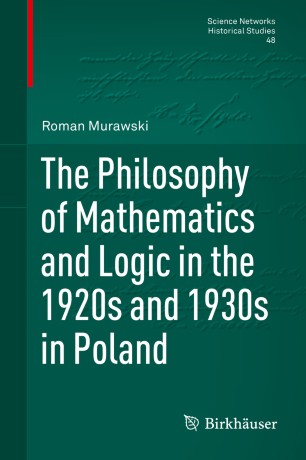 The aim of this book is to present and analyze philosophical conceptions concerning mathematics and logic as formulated by Polish logicians, mathematicians and philosophers in the 1920s and 1930s. It was a remarkable period in the history of Polish science, in particular in the history of Polish logic and mathematics. Therefore, it is justified to ask whether and to what extent the development of logic and mathematics was accompanied by a philosophical reflection. We try to answer those questions by analyzing both works of Polish logicians and mathematicians who have a philosophical temperament as well as their research practice. Works and philosophical views of the following Polish scientists will be analyzed: Wacław Sierpiński, Zygmunt Janiszewski, Stefan Mazurkiewicz, Stefan Banach Hugo Steinhaus, Eustachy Żylińsk and Leon Chwistek, Jan Łukasiewicz, Zygmunt Zawirski, Stanisław Leśniewski, Tadeusz Kotarbiński, Kazimierz Ajdukiewicz, Alfred Tarski, Andrzej Mostowski and Henryk Mehlberg, Jan Sleszyński, Stanisław Zaremba and Witold Wilkosz. To indicate the background of scientists being active in the 1920s and 1930s we consider in Chapter 1 some predecessors, in particular: Jan Śniadecki, Józef Maria Hoene-Wroński, Samuel Dickstein and Edward Stamm.