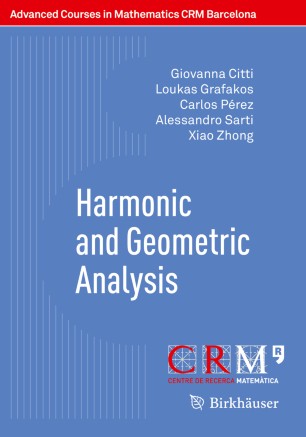 This book presents an expanded version of four series of lectures delivered by the authors at the CRM.

Harmonic analysis, understood in a broad sense, has a very wide interplay with partial differential equations and in particular with the theory of quasiconformal mappings and its applications. Some areas in which real analysis has been extremely influential are PDE's and geometric analysis. Their foundations and subsequent developments made extensive use of the Calderón–Zygmund theory, especially the Lp inequalities for Calderón–Zygmund operators (Beurling transform and Riesz transform, among others) and the theory of Muckenhoupt weights.

The first chapter is an application of harmonic analysis and the Heisenberg group to understanding human vision, while the second and third chapters cover some of the main topics on linear and multilinear harmonic analysis. The last serves as a comprehensive introduction to a deep result from De Giorgi, Moser and Nash on the regularity of elliptic partial differential equations in divergence form.