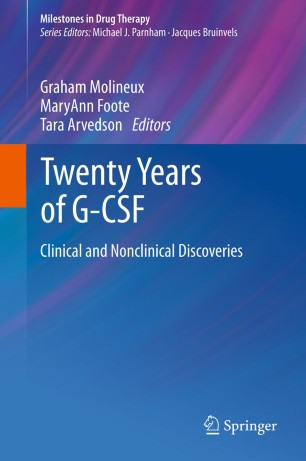 Part of the Milestones in Drug Therapy book series (MDT)

Granulocyte colony-stimulating factor (G-CSF or GCSF) is a secreted glycoprotein that stimulates the proliferation and differentiation of granulocyte precursor cells, and induces mobilization of peripheral blood progenitor cells from the bone marrow. Development of recombinant human G-CSF has had a profound impact on the treatment of many diseases, including severe chronic neutropenia and cancer, and has enabled peripheral stem cell transplantation to supplant bone marrow transplantation in the autologous setting.