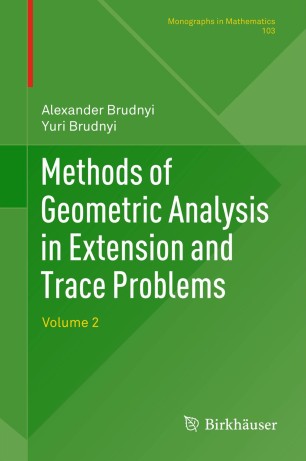 Methods of Geometric Analysis in Extension and Trace Problems

Part of the Monographs in Mathematics book series (MMA, volume 103)

This is the second of a two-volume work presenting a comprehensive exposition of extension results for maps between different geometric objects and of extension-trace results for smooth functions on subsets with no a priori differential structure (Whitney problems). The account covers the development of the area from the initial classical works of the first half of the 20th century to the flourishing period of the last decade. Seemingly very specific, these problems have been from the very beginning a powerful source of ideas, concepts and methods that essentially influenced and in some cases even transformed considerable areas of analysis. Aside from the material linked by the aforementioned problems the work is also unified by the geometric analysis approach used in the proofs of basic results. This requires a variety of geometric tools from convex and combinatorial geometry to geometry of metric space theory to Riemannian and Coarse geometry and more. The necessary facts are presented mostly with detailed proofs to make the book accessible to a wide audience.