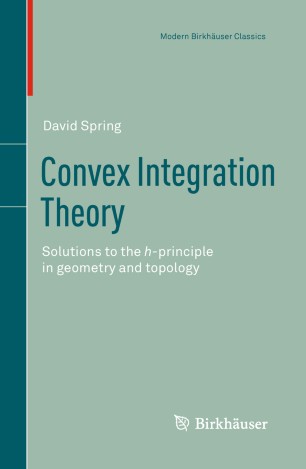 Solutions to the h-principle in geometry and topology

This book provides a comprehensive study of convex integration theory in immersion-theoretic topology. Convex integration theory, developed originally by M. Gromov, provides general topological methods for solving the h-principle for a wide variety of problems in differential geometry and topology, with applications also to PDE theory and to optimal control theory. Though topological in nature, the theory is based on a precise analytical approximation result for higher order derivatives of functions, proved by M. Gromov. This book is the first to present an exacting record and exposition of all of the basic concepts and technical results of convex integration theory in higher order jet spaces, including the theory of iterated convex hull extensions and the theory of relative h-principles. A second feature of the book is its detailed presentation of applications of the general theory to topics in symplectic topology, divergence free vector fields on 3-manifolds, isometric immersions, totally real embeddings, underdetermined non-linear systems of PDEs, the relaxation theorem in optimal control theory, as well as applications to the traditional immersion-theoretical topics such as immersions, submersions, k-mersions and free maps.

The book should prove useful to graduate students and to researchers in topology, PDE theory and optimal control theory who wish to understand the h-principle and how it can be applied to solve problems in their respective disciplines.

The first eight chapters of Spring’s monograph contain a detailed exposition of convex integration theory for open and ample relations with detailed proofs that were often omitted in Gromov’s book. (…) Spring’s book makes no attempt to include all topics from convex integration theory or to uncover all of the gems in Gromov’s fundamental account, but it will nonetheless (or precisely for that reason) take its place as a standard reference for the theory next to Gromov’s towering monograph and should prove indispensable for anyone wishing to learn about the theory in a more systematic way.

This volume provides a comprehensive study of convex integration theory. (…) We recommended the book warmly to all interested in differential topology, symplectic topology and optimal control theory.