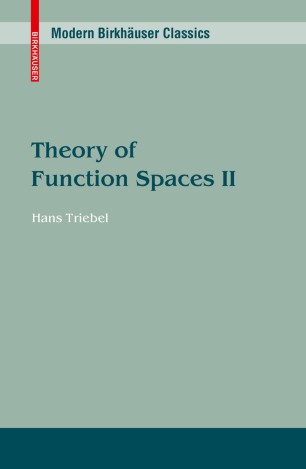 Theory of Function Spaces II deals with the theory of function spaces of type Bspq and Fspq as it stands at the present. These two scales of spaces cover many well-known function spaces such as Hölder-Zygmund spaces, (fractional) Sobolev spaces, Besov spaces, inhomogeneous Hardy spaces, spaces of BMO-type and local approximation spaces which are closely connected with Morrey-Campanato spaces.

Theory of Function Spaces II is self-contained, although it may be considered an update of the author’s earlier book of the same title.

The book’s 7 chapters start with a historical survey of the subject, and then analyze the theory of function spaces in Rn and in domains, applications to (exotic) pseudo-differential operators, and function spaces on Riemannian manifolds.

The first chapter deserves special attention. This chapter is both an outstanding historical survey of function spaces treated in the book and a remarkable survey of rather different techniques developed in the last 50 years. It is shown that all these apparently different methods are only different ways of characterizing the same classes of functions. The book can be best recommended to researchers and advanced students working on functional analysis.