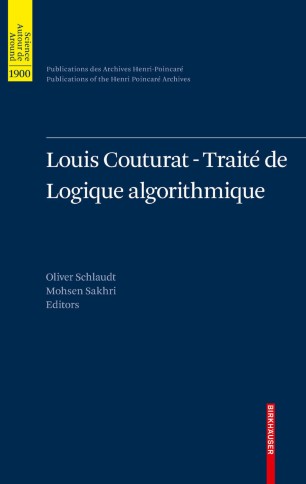 The manuscript of the Traité de Logique algorithmique resulted from lectures Couturat gave at the University of Caen in 1898/99 on recent developments in symbolic logic, on the relations of logic and mathematics, and on the scope of the methods of mathematics. It is the only one of several manuscripts Couturat mentioned in his correspondence that meanwhile has been rediscovered. It is an outstanding document of the popularization and propagation of symbolic logic around 1900. It allows to better understand the difficult relations of algebraic logic and the so-called logistic program which surpasses the simple alternative of logic as an application of algebra vs. logic as the foundation of mathematics. The complicated interactions in the historical developments of these two currents become manifest in Couturat's hesitations and changing attitudes within his own intellectual biography. The publication of this manuscript helps to achieve a much more complete picture of the latter.