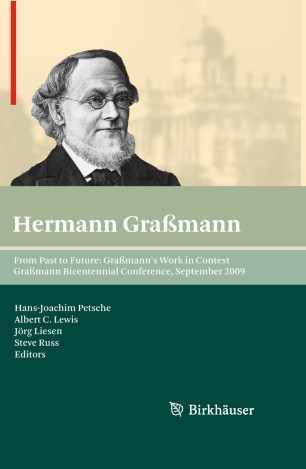 From Past to Future: Graßmann's Work in Context

On the occasion of the 200th anniversary of the birth of Hermann Graßmann (1809-1877), an interdisciplinary conference was held in Potsdam, Germany, and in Graßmann's hometown Szczecin, Poland. The idea of the conference was to present a multi-faceted picture of Graßmann, and to uncover the complexity of the factors that were responsible for his creativity. The conference demonstrated not only the very influential reception of his work at the turn of the 20th century, but also the unexpected modernity of his ideas, and their continuing development in the 21st century.

This book contains 37 papers presented at the conference. They investigate the significance of Graßmann's work for philosophical as well as for scientific and methodological questions, for comparative philology in general and for Indology in particular, for psychology, physiology, religious studies, musicology, didactics, and, last but not least, mathematics. In addition, the book contains numerous illustrations and English translations of original sources, which are published here for the first time. These include life histories of Graßmann (written by his son Justus) and of his brother Robert (written by Robert himself), as well as the paper "On the concept and extent of pure theory of number'' by Justus Graßmann (the father).

In November 2010 the capital of the federal state of Brandenburg (Germany) chose the Graßmann Conference as the first-time winner of the Potsdam Conference-Award in the category "Innovative and/or exceptional events".