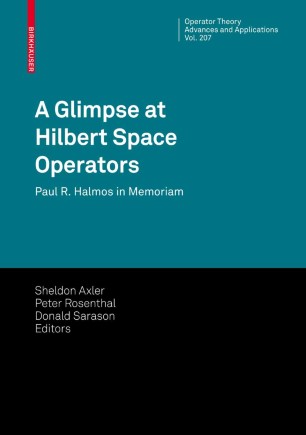 A Glimpse at Hilbert Space Operators

Paul Richard Halmos, who lived a life of unbounded devotion to mathematics and to the mathematical community, died at the age of 90 on October 2, 2006. This volume is a memorial to Paul by operator theorists he inspired. Paul’sinitial research,beginning with his 1938Ph.D. thesis at the University of Illinois under Joseph Doob, was in probability, ergodic theory, and measure theory. A shift occurred in the 1950s when Paul’s interest in foundations led him to invent a subject he termed algebraic logic, resulting in a succession of papers on that subject appearing between 1954 and 1961, and the book Algebraic Logic, published in 1962. Paul’s ?rst two papers in pure operator theory appeared in 1950. After 1960 Paul’s research focused on Hilbert space operators, a subject he viewed as enc- passing ?nite-dimensional linear algebra. Beyond his research, Paul contributed to mathematics and to its community in manifold ways: as a renowned expositor, as an innovative teacher, as a tireless editor, and through unstinting service to the American Mathematical Society and to the Mathematical Association of America. Much of Paul’s in?uence ?owed at a personal level. Paul had a genuine, uncalculating interest in people; he developed an enormous number of friendships over the years, both with mathematicians and with nonmathematicians. Many of his mathematical friends, including the editors ofthisvolume,whileabsorbingabundantquantitiesofmathematicsatPaul’sknee, learned from his advice and his example what it means to be a mathematician.

“This is a book about the legacy of Paul Halmos in Operator Theory … . if you want to delve deeper into the research topic that was central to his career, this book is an excellent place to start. Any researcher starting out in Operator Theory, Operator Algebras or a related area would also be well-advised to read this volume. It gives an excellent portrayal the sweep of history in a mathematical discipline and how it can be affected by one man.” (Gordon MacDonald, The Mathematical Association of America, October, 2010)
Buy options