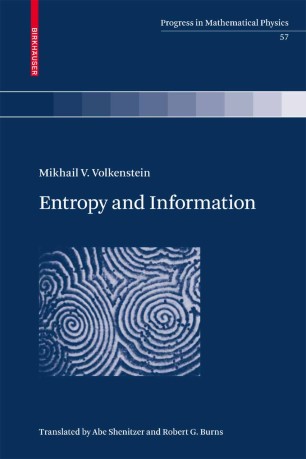 This is just...entropy, he said, thinking that this explained everything, and he repeated the strange word a few times. 1 ? Karel Capek , “Krakatit” This “strange word” denotes one of the most basic quantities of the physics of heat phenomena, that is, of thermodynamics. Although the concept of entropy did indeed originate in thermodynamics, it later became clear that it was a more universal concept, of fundamental signi?cance for chemistry and biology, as well as physics. Although the concept of energy is usually considered more important and easier to grasp, it turns out, as we shall see, that the idea of entropy is just as substantial—and moreover not all that complicated. We can compute or measure the quantity of energy contained in this sheet of paper, and the same is true of its entropy. Furthermore, entropy has remarkable properties. Our galaxy, the solar system, and the biosphere all take their being from entropy, as a result of its transferenceto the surrounding medium. Thereis a surprisingconnectionbetween entropyandinformation,thatis,thetotalintelligencecommunicatedbyamessage. All of this is expounded in the present book, thereby conveying informationto the readeranddecreasinghis entropy;butitis uptothe readertodecidehowvaluable this information might be.