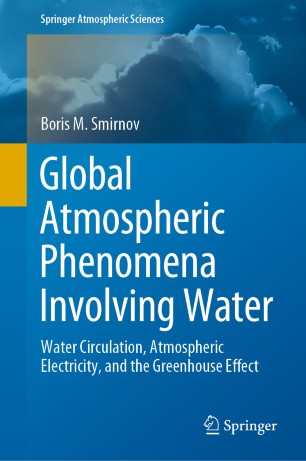 This book covers the role of water in global atmospheric phenomena, focussing on the physical processes involving water molecules and water microparticles. It presents the reader with a detailed look at some of the most important types of global atmospheric phenomena involving water, such as water circulation, atmospheric electricity and the greenhouse effect. Beginning with the cycle of water evaporation and condensation, and the important roles played by the nucleation and growth processes of water microdroplets, the book discusses atmospheric electricity as a secondary phenomenon of water circulation in the atmosphere, comprising a chain of processes involving water molecules and water microdroplets. Finally, the book discusses aspects of the molecular spectroscopy of greenhouse atmospheric components, showing how water molecules and water microdroplets give the main contribution to atmospheric emission in the infrared spectrum range. Featuring numerous didactic schematics and appendices detailing all necessary unit conversion factors, this book is useful to both active researchers and doctoral students working in the fields of atmospheric physics, climate science and molecular spectroscopy.

Boris Smirnov was born in 1938 in Moscow. In 1962 he graduated from Moscow's Engineering-Physical Institute in theoretical nuclear physics and obtained his Doctor of Phys. Mat. Science in 1968. He became a professor of physics in 1970. Between 1962 and 1982 he was Head of Laboratory at the Kurchatov Institute of Atomic Energy (Moscow), then from 1982 to 1986 Head of Laboratory at the Institute of Thermophysics (Novosibirsk) and from 1986 Head of Laboratory and Head of Department and, currently, Principal Scientist at the Joint Institute for High Temperatures of the Russian Academy of Science. B.M. Smirnov was a member of the editorial board of several journals of various publishers. He was a professor at the Moscow Power Institute, Novosibirsk, State University and the Moscow Institute of Science and Technology, and is a laureate of the National Prize of Russia. His research focusses on theoretical physics, atomic, molecular, cluster, plasma and chemical physics. He is the author of 59 books and about 500 papers.