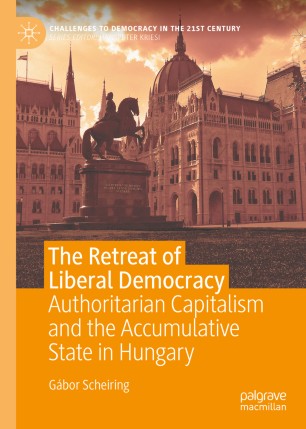 The Retreat of Liberal Democracy

Authoritarian Capitalism and the Accumulative State in Hungary

This book is the product of three years of empirical research, four years in politics, and a lifetime in a country experiencing three different regimes. Transcending disciplinary boundaries, it provides a fresh answer to a simple yet profound question: why has liberal democracy retreated?

Scheiring argues that Hungary’s new hybrid authoritarian regime emerged as a political response to the tensions of globalisation. He demonstrates how Viktor Orbán’s Fidesz exploited the rising nationalism among the working-class casualties of deindustrialisation and the national bourgeoisie to consolidate illiberal hegemony.

As the world faces a new wave of autocratisation, Hungary’s lessons become relevant across the globe, and this book represents a significant contribution to understanding challenges to democracy. This work will be useful to students and researchers across political sociology, political science, economy and social anthropology, as well democracy advocates.

Gabor Scheiring is a Marie Curie Fellow at Bocconi University, Milan. His research focuses on the political economy of health, the human price of globalisation and the role of class in illiberalism. He served as a member of the Hungarian Parliament between 2010–2014.

“Scheiring’s political economy of Orbán’s illiberal democracy is monumental, exhaustive and compelling. His case might not be irrefutable, but it marks a quantum raising of the bar in the contemporary analysis of “illiberal democracy” in Europe.ˮ (Nigel Swain)

“Gábor Scheiring’s book is gift to all of us trying to understand a key puzzle of the 21st century political-economy: how are regressive authoritarian regimes successfully constructed within formal democratic facades?  Scheiring’s complex but compelling narrative illuminates Hungary’s embrace of hybrid authoritarian capitalism and skillfully embeds it in the interplay of national politics and global capitalism. Conceptually bold, theoretically nuanced, built on firm empirical foundations, the book is a model of how to research and theorize the new rise of authoritarianism.” (Peter B. Evans, Professor Emeritus, Department of Sociology, University of California, Berkeley, USA)

“In this book Scheiring provides a path-breaking analysis of one of the most unexpected turns toward right-wing populism -- the transformation of Hungary from the leading liberal democracy of post-communism to a self-declared ‘illiberal democracy.’ This book provides the first explanation for right-wing populism rooted in intra-dominant class conflict and collaboration, highlighting the role of the national-based bourgeoisie that had been marginalized by previous governments. This book will set the agenda for the study of right-wing populism and is essential reading for those wishing to understand this phenomenon in Central Europe and indeed the world.” (Lawrence P. King, Professor of Economics, University of Massachusetts Amherst, USA)

“If Hungary is the avant-garde case of illiberal breakthrough in Europe, this book is the ultimate analysis of it. The message: it's not immigrants, it's class! Not in any simple or deductive way, though. The book is brilliant in bringing all the threads of that complex narrative together. A model of the new cultural political economy.” (Don Kalb, Professor of Social Anthropology, University of Bergen)

“This book is a tour de force. Combining theoretical sophistication with empirical precision, Gábor Scheiring digs deep into the structural causes of illiberalism in Hungary, of which Viktor Orbán is the increasingly disturbing symptom. Scheiring deploys relational class analysis to specify the post-2010 ‘accumulative state’ that has successfully harnessed two different ‘countermovements,’ that of  the national bourgeoisie and that of working-class casualties of deindustrialization. He offers meticulous illumination of both the internal hypocrisies of the regime (authoritarian neo-nationalism masking increasing social polarization) and the external complicities (transnational capital flows and EU transfers) that have sustained it for the last decade.” (Chris Hann, Director, Max Planck Cambridge Centre for Ethics, Economy and Social Change, University of Cambridge, UK)

“Gábor Scheiring has written a thoughtful, provocative, theoretically sophisticated and empirically rich book on the death of a new democracy in Europe. As political economist he follows methodological pluralism when explaining the structural reasons of this historic breakdown. He convincingly argues that the failure has primarily been caused by market fundamentalism, a dominant idea in Eastern Europe after 1989. The author rehabilitates the concept of class in the post-socialist context and develops his fascinating analysis on three pillars – class, state and dependency – all of them interpreted in a novel way.” (András Bozóki, Professor of Political Science, Central European University, Hungary)

“Gábor Scheiring wrote an excellent, novel and convincing book about the retreat of liberal democracy. The book shows that illiberal populism is not merely an expression of the ‘national character’ of Hungarians, but a result of the interplay of global and local processes. Scheiring brilliantly analyses the fall of the ‘competition state’ and Hungary’s top-down democracy (1990–2010), which paved the way for the rise of what he innovatively calls the ‘accumulative state’ and ‘authoritarian capitalism’ (2010-). From the revolving doors between the state and businesses, through the lived experience of class dislocation, the book is as rich empirically as it is innovative theoretically.” (Ivan Szelenyi, Professor Emeritus of Sociology and Political Science, Yale University, USA)