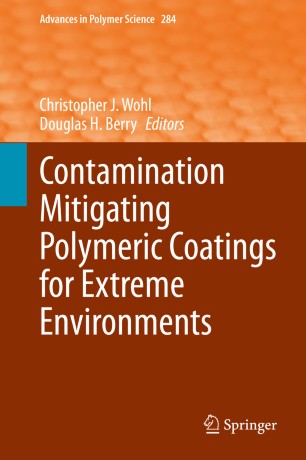 This volume provides perspectives on the approaches, mechanisms, test methods, durability considerations, and environmental concerns for contamination mitigating coatings and polymers with emphasis on their use in more extreme aerospace and marine terrestrial environments. Parts of the Volume are devoted to application of biomimetics to contamination mitigation polymeric coatings, low ice adhesion surfaces, insect residue adhesion resistance coatings, and marine biofouling mitigation materials. By juxtaposing ice insect, and marine mitigation approaches, researchers and users may more easily identify threads of similarity that will assist in future developments and potential applications in these areas. The volume is of interest to chemists and material scientists in providing awareness of both the need for efficacy in mitigating contamination and for appropriate coating durability; to physicists in providing better understanding of the interaction between the contaminant, the coated surface, and the surrounding environment; and to engineers in describing the need for better scale-up tests between laboratory and field environments.

Christopher J. Wohl, Ph.D. is a senior research scientist in the Advanced Materials and Processing Branch at the NASA Langley Research Center in Hampton, VA. He has experience in a variety of fields including physical, polymeric, and organic chemistry, laser spectroscopy, kinetics, and surface and interfacial sciences. He has researched the generation, characterization, and modification of novel materials for adhesion mitigation involving surface engineering and self-organizing systems. He has also been involved with process identification and modification for surface preparation of adhesively bonded interfaces including both composite and metallic substrates. He received a B.S. (Chemistry) from Virginia Polytechnic Institute and State University in 2002 and a Ph.D. (Physical Chemistry) from Virginia Commonwealth University in 2006. He is the author or coauthor of 36 peer reviewed journal articles, 65 other referenceable publications (conference proceedings), 26 invention disclosures, 13 patent applications, and 8 issued patents. He has received several awards including the NASA Exceptional Technology Achievement Medal in 2018, an Aviation Week Laureate Award in 2016, the NASA ARMD Associate Administrator Award in 2016, a NASA Group Achievement Award in 2014 for flight testing insect adhesion mitigation coatings, the NASA Langley Engineering Directorate Innovation Award in 2011 (part of a six member team), the American Chemical Society’s Young Chemist Committee Leadership Award in 2010, among others.
Douglas H. Berry retired in 2016 as an Associate Technical Fellow in Chemical Technology from The Boeing Company. During his 20 years at Boeing, he had responsibilities for developing aerospace finishing technologies and durability tests, including those related to coating adhesion promotion, basecoat-clearcoats, aerodynamically functional coatings, and ice and insect adhesion mitigation coatings. He received his Ph.D. in Chemical Engineering from Princeton University in 1982 and has published 16 journal papers and given over 65 conference presentations. In collaboration with Commonwealth Scientific and Industrial Research Organization (CSIRO) Australia, Dr. Berry has two patents related to improving adhesion between fresh and cured paint which are widely used on commercial airplanes. For this work, he received a Boeing Special Invention Award (2010), a CSIRO CSME Chief’s Innovation Award (2010), a CSIRO Organization-wide Medal for Research Achievement (2011) and a Boeing Replication Award (2012). He has two patents related to aerodynamically functional coatings to preserve laminar flow for which he received a Boeing Special Invention Award (2015). He also has four patents on ice adhesion mitigation coatings. In collaboration with NASA, he received a NASA Group Achievement Award (2014) and a NASA ARMD Associate Administrator Award (2016) for flight testing insect adhesion mitigation coatings. He helped develop and write an ASTM standard on an enhanced weathering protocol for transportation coatings and a SAE AIR on aerospace surface coating considerations, focusing on durability constraints and interactions with deicing/anti-icing fluids. Prior to his work at Boeing, Dr. Berry spent 17 years as a research scientist and engineer in the paper and pulp and chemical resin industries. In retirement, he is currently a Technical Editor for the Journal of Coatings Technology and Research.