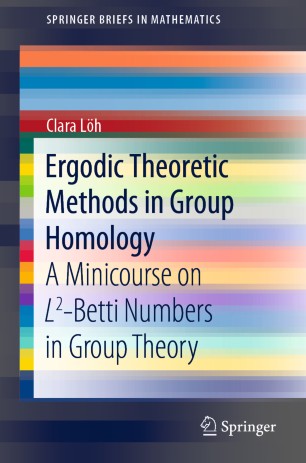 A Minicourse on L2-Betti Numbers in Group Theory

This book offers a concise introduction to ergodic methods in group homology, with a particular focus on the computation of L2-Betti numbers.

Group homology integrates group actions into homological structure. Coefficients based on probability measure preserving actions combine ergodic theory and homology. An example of such an interaction is provided by L2-Betti numbers: these invariants can be understood in terms of group homology with coefficients related to the group von Neumann algebra, via approximation by finite index subgroups, or via dynamical systems. In this way, L2-Betti numbers lead to orbit/measure equivalence invariants and measured group theory helps to compute L2-Betti numbers. Similar methods apply also to compute the rank gradient/cost of groups as well as the simplicial volume of manifolds.

This book introduces L2-Betti numbers of groups at an elementary level and then develops the ergodic point of view, emphasising the connection with approximation phenomena for homological gradient invariants of groups and spaces. The text is an extended version of the lecture notes for a minicourse at the MSRI summer graduate school “Random and arithmetic structures in topology” and thus accessible to the graduate or advanced undergraduate students. Many examples and exercises illustrate the material.

Clara Löh is Professor of Mathematics at the University of Regensburg, Germany. Her research focuses on simplicial volume and the interaction between geometric topology, geometric group theory, and measured group theory. This includes cohomological, geometric, and combinatorial methods.