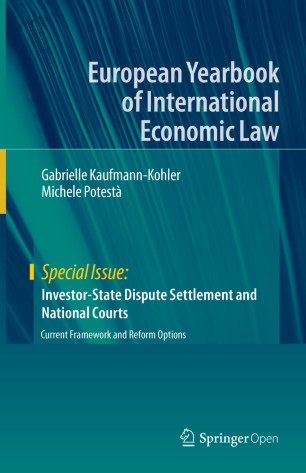 This open access book examines the multiple intersections between national and international courts in the field of investment protection, and suggests possible modes for regulating future jurisdictional interactions between domestic courts and international tribunals.
The current system of foreign investment protection consists of more than 3,000 international investment agreements (IIAs), most of which provide for investment arbitration as the forum for the resolution of disputes between foreign investors and host States. However, national courts also have jurisdiction over certain matters involving cross-border investments. International investment tribunals and national courts thus interact in a number of ways, which range from harmonious co-existence to reinforcing complementation, reciprocal supervision and, occasionally, competition and discord. The book maps this complex relationship between dispute settlement bodies in the current investment treaty context and assesses the potential role of domestic courts in future treaty frameworks that could emerge from the States’ current efforts to reform the system.
The book concludes that, in certain areas of interaction between domestic courts and international investment tribunals, the “division of labor” between the two bodies is not always optimal, producing inefficiencies that burden the system as a whole. In these areas, there is a need for improvement by introducing a more fruitful allocation of tasks between domestic and international courts and tribunals – whatever form(s) the international mechanism for the settlement of investment disputes may take.
Given its scope, the book contributes not only to legal analysis, but also to the policy reflections that are needed for ongoing efforts to reform investor-State dispute settlement.

Gabrielle Kaufmann-Kohler is Professor Emerita of international arbitration of the University of Geneva Law School, where she founded the MIDS program, and is a Visiting Professor at the National University of Singapore, Georgetown University, Sciences Po Paris and Tsinghua Beijing. She is also a Founding Partner of Lévy Kaufmann-Kohler in Geneva. Since April 2018, she is the President of the International Council for Commercial Arbitration (ICCA).
Michele Potestà is a senior researcher at CIDS, where he is involved in a research project dealing with the reform of investor-state dispute settlement (ISDS). Within that framework, he has co-authored for UNCITRAL the First CIDS Report on ISDS Reform and the CIDS Supplemental Report. From 2010 to 2013, he was a lecturer at the Geneva LL.M. in International Dispute Settlement (MIDS), where he taught both investment and commercial arbitration. He has authored numerous publications on issues of investment treaty law and arbitration. Michele is also an attorney at Lévy Kaufmann-Kohler in Geneva, practicing international commercial and investment arbitration.