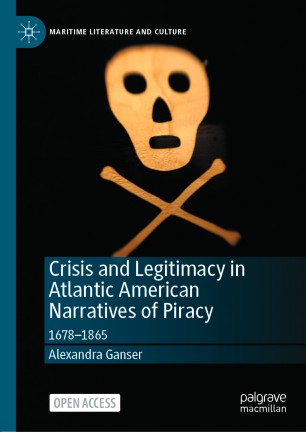 Crisis and Legitimacy in Atlantic American Narratives of Piracy

Part of the Maritime Literature and Culture book series (MILAC)

This Open Access book, Crisis and Legitimacy in Atlantic American Narratives of Piracy: 1678-1865, examines literary and visual representations of piracy beginning with A.O. Exquemelin’s 1678 Buccaneers of America and ending at the onset of the US-American Civil War. Examining both canonical and understudied texts—from Puritan sermons, James Fenimore Cooper’s The Red Rover, and Herman Melville’s “Benito Cereno” to the popular cross-dressing female pirate novelette Fanny Campbell, and satirical decorated Union envelopes, this book argues that piracy acted as a trope to negotiate ideas of legitimacy in the contexts of U.S. colonialism, nationalism, and expansionism. The readings demonstrate how pirates were invoked in transatlantic literary production at times when dominant conceptions of legitimacy, built upon categorizations of race, class, and gender, had come into crisis. As popular and mobile maritime outlaw figures, it is suggested, pirates asked questions about might and right at critical moments of Atlantic history.

Alexandra Ganser is Professor of American Studies at the University of Vienna, Austria, where she also heads the interdisciplinary research platform and PhD program “Mobile Cultures and Societies” and co-directs the Centre for Canadian Studies. Focusing on mobility in North American literature and culture in her work, she has received research awards and grants in Austria, Germany, the UK, and the US.

“While the maritime imagination is now a well-established research topic, the role of pirates in this context has remained all but elusive, despite their ongoing popularity. This book is important for the study of popular culture in America, which needs to be expanded to early American studies. By historicizing piracy in its romanticized and demonized variants in a longue duree study, Ganser also adds substantially to the scholarship on the Atlantic as a transnational space. Extremely fascinating, cutting-edge scholarship.” (Heike Paul, winner of the Gottfried Wilhelm Leibniz Award 2018)

“A highly successful book in its conceptual-theoretical analysis of the pirate as a figure of empire, as a prototype for different legalistic-political orders in the Americas, and as a foil for divergent discursive formations and shift. Deep read and methodologically well thought-out throughout.” (Udo Hebel, former Chair of the International Committee of the American Studies Association/ASA)

“The author breaks new ground by wresting hitherto little explored material from the archive. But above all, it is the comprehensive synopsis of various local scenarios and a consequent border-crossing perspective that render this study a masterpiece of remarkable originality. It contributes to freeing the figure of the pirate from the muck of romanticizing fictions, rethinking the pirate as a central ideological category and a sign of societal crisis. This is a great and superbly presented achievement.” (Gesa Mackenthun, author of Metaphors of Dispossession: American Beginnings and the Translation of Empire, 1492–1637 (1997) and Fictions of the Black Atlantic in American Foundational Literature (2004))