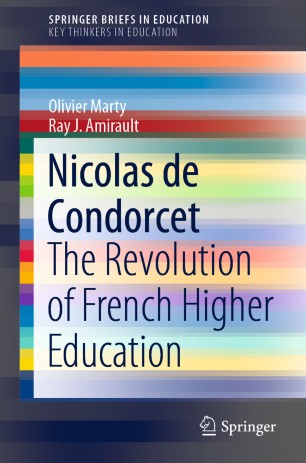 The Revolution of French Higher Education

This Springer brief explores the contribution of Nicolas de Condorcet in French higher education, the historical development of his work and its influence on the history of the French education system.
Condorcet's educational proposals were first devised as five Memoires, which were consolidated into the ‘Rapport et Projet de Decret sur l'Organisation Generale de l'Instruction Publique’. This report has sparked debate on the subject of education in the past and lives on as a basis for ongoing iterations of plans for education by other writers.
In developing these ideas and especially how they apply to higher education, this book bridges the gap between the 18th century French Enlightenment shift and the Revolution of higher education, with the advent of the Grandes Écoles such as École Normale Supérieure, École Polytechnique and Conservatoire National des Arts et Metiers. Each of these schools was represented by a specific institutionalized educational idea rooted in the works of the philosopher.
This book offers insights to a wider audience in the educational thought of Condorcet, which at the time of his writing was overshadowed by Rousseau, and shows how his ideas of liberty and equality flourish in the French educational system and remain an important part in today's French academic, cultural and political culture.

Olivier Marty holds a philosophy doctorate in ethics, directed by Francis Wolff, Professor at École Normale Supérieure (2011). He is further specialized in education sciences with a Habilitation à diriger les recherches entitled: Anthropology of educational organizations, prepared at Conservatoire National des Arts et Métiers and defended in 2017. He has served as Director of Studies for the governing boards of University Paris 8.

Dr. Ray J. Amirault holds a PhD and MSc in Instructional Systems from Florida State University and a BSc in Computer Science from The University of West Florida. Ray has worked in online education as an assistant professor, instructor, course designer, and researcher for over two decades. He is the International Section Director of QRDE, as well as on the Review Board of two other professional journals, ETR&D and The Internet and Higher Education. He is published by Cambridge University Press, Elsevier, Routledge, IAP Press, and a number of distance learning and educational technology journals. Ray is a native of Chicago, Illinois and currently works at Illinois State University in Normal, Illinois.