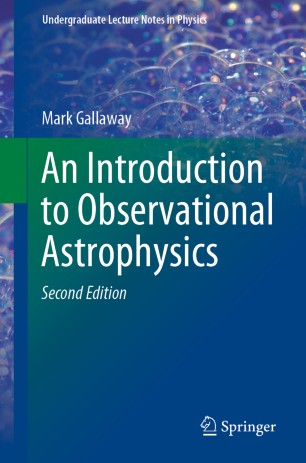 An Introduction to Observational Astrophysics

The observational component of astronomy is an exciting and vital part of any astrophysics degree. With the advent of low-cost astronomical cameras and remote and robotic operation, more students than ever have the opportunity to observe and perform observatory research.
This updated and fully corrected textbook provides a comprehensive overview of practical observing techniques for undergraduate astrophysics courses. The chapters introduce students to the basics of the field before delving into telescope types, the nature and operation of the astronomical camera, imaging techniques and reduction, photometry and spectrography, and solar and radio observations.
The second edition covers the latest research on calibrating the telescope-camera-observatory system. It contains revised information on all available astronomy equipment, including filters, webcams, sensors, and telescope designs. Also included is an entirely new chapter on exoplanet transit measurements. The textbook’s practical approach will guide readers from basic first-year techniques to those required for a final-year project.

He regularly appears on the BBC and other UK national broadcasters both as an expert. Furthermore, Dr. Gallaway has consulted on a number of general science programs in including the BBC documentary  “How Satellites Rule Our Lives” and the series “How dangerous is….?”