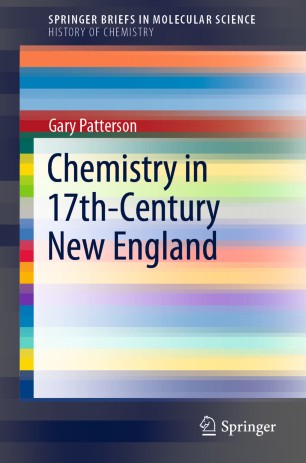 This book explores the lively chemistry culture that arose during the 17th century in Colonial New England. This was chiefly due to the efforts of John Winthrop, Jr. who brought both chemical knowledge and the largest library of chemical books in the New World to Boston. He founded towns, such as Ipswich and New London, and industrial enterprises, such as salt works and ironworks, while also serving as the primary source of Paracelsian medicines, which led him to become the most famous physician in Colonial New England. Moreover, the book covers topics such as the founding of Harvard College, and the life and works of Cotton Mather, especially Magnalia Christi Americana, one of the most important vanity volumes in the history of scholarly publication.

Gary Patterson is Professor of Chemistry Emeritus at Carnegie Mellon University in Pittsburgh, Pennsylvania.  He is a member of the Board of Directors of the Science History Institute in Philadelphia, Pennsylvania and the Chair of its Heritage Council. He was educated at Harvey Mudd College (B.S. Chemistry, 1968) and Stanford University (Ph.D. Physical Chemistry 1972). He was a Member of Technical Staff at AT&T Bell Laboratories from 1972-1984. He was Professor of Chemistry at Carnegie Mellon University from 1984-2018. He was the Charles Price Fellow at the Chemical Heritage Foundation in 2004-2005. He is a Fellow of the Royal Society of Chemistry and the American Physical Society. Professor Patterson is the Historian of the Division of the History of Chemistry of the American Chemical Society.