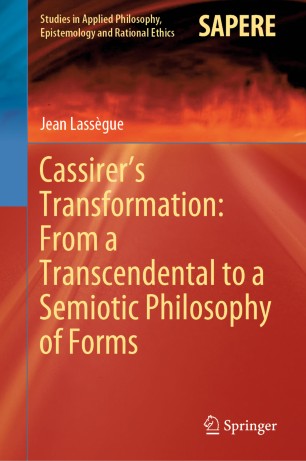 Cassirer’s Transformation: From a Transcendental to a Semiotic Philosophy of Forms

This book presents the transformation of Cassirer’s transcendental point of view. At an early stage, Cassirer was confronted with a scientific crisis triggered by the emergence of various forms of objective knowledge, such as the plurality of geometric axiom systems and non-Euclidean geometry in relativistic physics. He finally developed a solution to the problematic unity of objective knowledge by replacing the overarching notion of objectivity with that of forms of objectification. This led him to consider the notion of “symbolic forms” as the driving force in the objectification process. This concept would become instrumental in demonstrating that the objective and human sciences are not adversaries; they merely differ in their modes of semiotic construction. These modes cannot be summarized in a fixed list of symbolic forms but operate transversally, at a level where Cassirer distinguishes between three specific operators: Expression, Evocation and Objectification. The last part of the book investigates how the relationships between these three operators stabilize specific symbolic forms. Four of these forms are then studied as examples: Myth and Ritual, Language, Scientific Knowledge, and Technology.