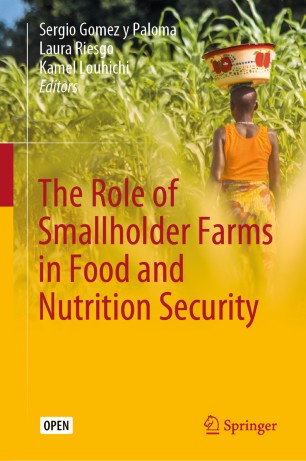 The Role of Smallholder Farms in Food and Nutrition Security

This open access book discusses the current role of smallholders in connection with food security and poverty reduction in developing countries. It addresses the opportunities they enjoy, and the constraints they face, by analysing the availability, access to and utilization of production factors.
Due to the relevance of smallholder farms, enhancing their production capacities and economic and social resilience could produce positive impacts on food security and nutrition at a number of levels.
In addition to the role of small farmers as food suppliers, the book considers their role as consumers and their level of nutrition security. It investigates the link between agriculture and nutrition in order to better understand how agriculture affects human health and dietary patterns. Given the importance of smallholdings, strategies to increase their productivity are essential to improving food and nutrition security, as well as food diversity.

Sergio Gomez y Paloma, PhD, is a senior researcher and scientific officer at the Joint Research Centre (JRC) of the European Commission (EC), Seville, Spain. He studied Agricultural Sciences and Agricultural Economics (Bs, MSc, and PhD) at the universities of Bologna, Milano and Napoli (Italy), and Agro Paris Tech (France). In 1991–1996 he was a lecturer at Roskilde Universitetscenter Department of Economics and Planning (Denmark), where he was co-director for the European Master ESST (Society, Science and Technology). He has been an advisor to the EU Economic and Social Committee, Brussels (1992–1995). Since 1996 he has worked at the EC-JRCI, where he has coordinated the Project on Mediterranean and Regional Perspectives and the Action on Sustainable Agriculture and Rural Development. He is currently coordinating activities related to quantitative analysis of the farming sector in sub-Saharan Africa. In 2011-2014 he was a member of the editorial board of the journal Applied Economics Perspectives and Policy (Oxford University Press). He is 2015 to date Associate Editor of Agricultural Economics, the journal of the International Association of Agricultural Economists (Blackwell/Elsevier). He has published on agricultural economics, transition and development economics.

Laura Riesgo, PhD, is associate professor at Pablo de Olavide University and currently a researcher at the Joint Research Center (JRC) of the European Commission (EC), Seville, Spain. Previously she was a researcher in agricultural economics at the University of Valladolid, Spain, (2001–2002) and at EC-JRC (2009–2011). Her research interests fall in the areas of agricultural economics and natural resource economics, with a specific interest in agricultural water use, agricultural sustainability, socioeconomic impact of genetically modified crops, modelling of farmers’ behaviour and, more recently, development economics. She has participated in many research projects funded by the European Union and the Spanish Ministry of Science, and has published in several peer-reviewed scientific journals.

Kamel Louhichi is a senior researcher at the French National Institute for Agriculture, Food and Environment (INRAE). From 2011–2019, he has been seconded as Scientifc Project Officer at the Joint Research Centre (JRC) of the European Commission (EC), Seville. He is an agricultural economist specializing in quantitative analysis of agricultural and environmental policies. He has extensive experience in mathematical programming models and in bio-economic modelling approaches, integrating biophysical and economic models. He has been involved in several ongoing national and international projects on assessing the impact of technological innovation and agricultural policies, mainly the EU’s Common Agricultural Policy. In recent years, he has specialized in food security and poverty analysis in developing countries, mainly in Africa. He is the author and co-author of several peer reviewed scientific articles and numerous contributions to scientific conferences related to this field.