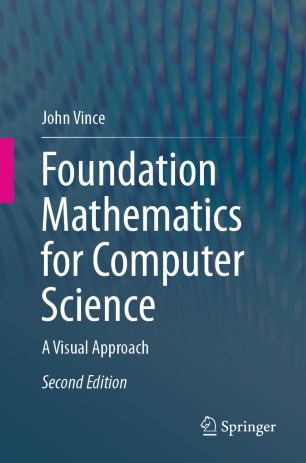 John Vince describes a range of mathematical topics to provide a solid foundation for an undergraduate course in computer science, starting with a review of number systems and their relevance to digital computers, and finishing with differential and integral calculus. Readers will find that the author’s visual approach will greatly improve their understanding as to why certain mathematical structures exist, together with how they are used in real-world applications.

This second edition includes new, full-colour illustrations to clarify the mathematical descriptions, and in some cases, equations are also coloured to reveal vital algebraic patterns. The numerous worked examples will help consolidate the understanding of abstract mathematical concepts.

Whether you intend to pursue a career in programming, scientific visualisation, artificial intelligence, systems design, or real-time computing, you should find the author’s literary style refreshingly lucid and engaging, and prepare you for more advanced texts.

Professor John Vince began working in computer graphics at Middlesex Polytechnic in 1968. His research activities centered on computer animation software and resulted in the PICASO and PRISM animation systems. Whilst at Middlesex, he designed the UK’s first MSc course in Computer Graphics and developed a popular program of short courses in computer animation for television designers. In 1986 he joined Rediffusion Simulation as a Research Consultant and worked on the development of real-time computer systems for commercial flight simulators. In 1992 he was appointed Chief Scientist of Thomson Training Simulation Ltd. In 1995 he was appointed Professor of Digital Media at the National Centre for Computer Animation at Bournemouth University and in 1999 he was made Head of Academic Group for Computer Animation. He was awarded a DSc by Brunel University in recognition of his work in computer graphics. He has written and edited over 40 books on computer graphics, computer animation and virtual reality, including the following Springer titles:

• Expanding the Frontiers of Visual Analytics and Visualization (2012)