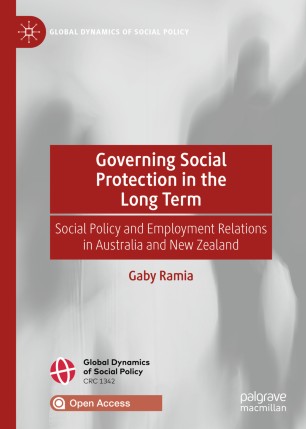 Social Policy and Employment Relations in Australia and New Zealand

This open access book examines the comparative evolution of social protection in Australia and New Zealand from 1890 to the present day, focusing on the relationship between employment relations and social policy. Utilising longstanding and more recent developments in historical institutionalist methodology, Ramia investigates the relationship between these two policy domains in the context of social protection theory. He argues that treating employment relations as dynamic, and as inextricably intertwined with changes in the welfare state over time, allows for more accurate portrayal of similarity and difference in social protection.

The book will be of most interest to researchers, advanced undergraduate and postgraduate students in social policy, employment relations, public policy, social and political history, and comparative politics.

“Governing Social Protection in the Long Term stands as a pillar of comparative and historical analysis within the welfare state field. Gaby Ramia’s book is without doubt the single most important contribution to our understanding of the Australian and New Zealand welfare regimes since Castles’ Working Class and Welfare in 1985. What is particularly impressive is Ramia’s ability to tease out the historical interplay – or dialects if you wish – between changes in the world of employment and in social policy. This is a must-read book for any serious social policy scholar.” — Professor Gosta Esping-Andersen, University of Pompeu Fabra, Spain

“This book sheds important historical and cross-national comparative light on the development trajectories of two often-misunderstood welfare regimes – Australia and New Zealand. It is a must-read for anyone excited about the past, present and future of social policy.” — Professor Nicola Yeates, The Open University, UK

“Here, Gaby Ramia rethinks the evolving relationship of work and welfare in Australia and New Zealand and suggests new ways of approaching the history of social protection. This illuminating and richly contextualised account will be valuable not only to students of political and policy history, but also to other social scientists interested in the complex story of divergence and convergence that characterises industrial relations and social welfare in these two antipodean democracies.” — Professor Frank Bongiorno, Australian National University, Australia

“The social protection and employment regimes of Australia and New Zealand have long been recognised as ‘special’.   In this carefully-crafted historical and comparative analysis, Gaby Ramia bring us a wealth of new insights into this special relationship, showing us how these two cases have changed through time, and diverged quite as much as they have overlapped.  It is essential reading for those who want to understand how the relationship between employment and welfare regimes really works.” — Professor Chris Pierson, University of Nottingham, UK

“Australia and New Zealand remain terra incognita for most welfare scholars, despite their pioneering social policies. Gaby Ramia charts the evolution of their welfare states and, critically, their interaction with and dependence on their employment systems. He thus usually updates and amends Francis Castles original mapping of the Antipodes.” — Professor Herman Schwartz, University of Virgina. USA