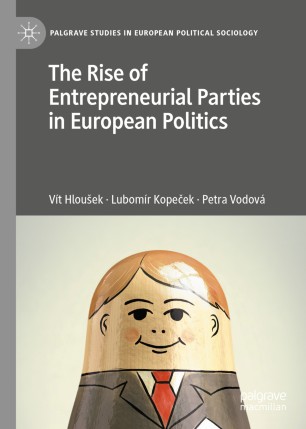 The Rise of Entrepreneurial Parties in European Politics

‘Drawing on examples from across the European continent, the authors chart the rise, fall and occasional endurance of entrepreneurial parties, highlighting their internal structures, sources of finance and pitches to the electorate. This is a pioneering study furnished with fascinating insights and detailed analysis from which scholars and students of political parties will learn a lot.’

‘This is a pioneering study which brings a comparative typology to bear on an important and under-explored set of parties hitherto mainly researched as individual case studies. It is also especially to be commended for bringing together parties from both Western and Eastern Europe in a single coherent analytical framework, and for unravelling the difficult distinction between parties founded by businesses and businesspeople and a broader set of top-down start-up parties created with a looser “entrepreneurial” rationale. The book will be essential reading for anyone wanting to get to grips with some of the more recent shifts is landscape of party politics in contemporary Europe and their consequences for democratic politics.’

Political parties run by entrepreneurs as a means to their own end are a recent phenomenon found in many countries, and their electoral influence has never been greater. This book offers a thorough comparative analysis of such parties in Western and East-Central Europe. The book clearly separates these party enterprises from other, more traditional, political platforms as it contributes to our understanding of the potential of entrepreneurial parties. The authors offer a unique typology based on two characteristics: whether the party receives private financial, media or other investment; and the nature of its membership and territorial structure. Famous examples of entrepreneurial parties, alongside their lesser-known counterparts, serve in this book as valuable material for conceptual innovation and the investigation into why certain entrepreneurial party types succeed or fail.

Petra Vodová is Assistant Professor of Political Science at the University of Hradec Králové, Czech Republic.

Petra Vodová is Assistant Professor of Political Science at the University of Hradec Králové, Czech Republic.

“This is a highly relevant and pioneering study that should intrigue all academics studying European politics. … Richness of the accounts the book offers is its yet another major strength, arising certainly to no small degree from the brave descriptions of all sorts of behind-closed-doors dealings. Indeed, with how well the book documents the party-building process with respect to its success or failure, one could even remark that it would make an excellent read for political entrepreneurs themselves.” (Filip Fila, Journal of Contemporary European Studies, November 11, 2020)