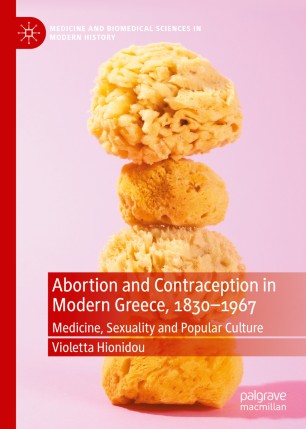 Abortion and Contraception in Modern Greece, 1830-1967

The book examines the history of abortion and contraception in Modern Greece from the time of its creation in the 1830s to 1967, soon after the Pill became available. It situates the history of abortion and contraception within the historiography of the fertility decline and the question of whether the decline was due to adjustment to changing social conditions or innovation of contraceptive methods. The study reveals that all methods had been in use for other purposes before they were employed as contraceptives. For example, Greek women were employing emmenagogues well before fertility was controlled; they did so in order to ‘put themselves right’ and to enhance their fertility. When they needed to control their fertility, they employed abortifacients, some of which were also emmenagogues, while others had been used as expellants in earlier times. Curettage was also employed since the late nineteenth century as a cure for sterility; once couples desired to control their fertility curettage was employed to procure abortion. Thus couples did not need to innovate but rather had to repurpose old methods and materials to new birth control methods. Furthermore, the role of physicians was found to have been central in advising and encouraging the use of birth control for ‘health’ reasons, thus facilitating and speeding fertility decline in Greece. All this occurred against the backdrop of a state and a church that were at times neutral and at other times disapproving of fertility control.

Violetta Hionidou is Senior Lecturer in Modern European History at Newcastle University, UK. She has taught at Southampton University, UK, Crete University, Greece and has recently held the visiting Research Fellowship at the Seeger Centre for Hellenic Studies, Princeton University, USA. She is the author of Famine and Death in Occupied Greece, 1941–1944 and co-winner of the 2007 Edmund Keeley Book Prize. She has received funding from the European Union, the Wellcome Trust, the British Academy, ESRC and the Nuffield Foundation.

“The readership of this fine analysis will be as broad as its range of sources, from demographers to historians of medicine, including gynecologists and physicians, policy makers and also women. But it will also be of interest to students as a model of a cross-disciplinary study of a historical analysis of personal choices and practices. … This is a masterpiece of fine analysis of a process all too often reduced to either charlatanism (the witches' herbs) or hyper-medicalization (the Pill).” (Alain Touwaide, Doody's Book Reviews, August 28, 2020)