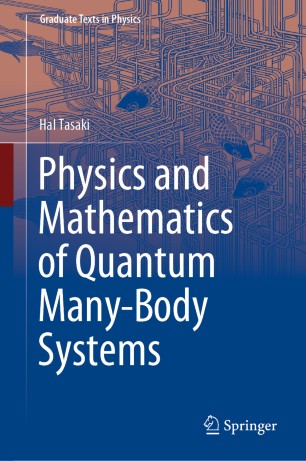 This book is a self-contained advanced textbook on the mathematical-physical aspects of quantum many-body systems, which begins with a pedagogical presentation of the necessary background information before moving on to subjects of active research, including topological phases of matter.

The book explores in detail selected topics in quantum spin systems and lattice electron systems, namely, long-range order and spontaneous symmetry breaking in the antiferromagnetic Heisenberg model in two or higher dimensions (Part I), the Haldane phenomenon in antiferromagnetic quantum spin chains and related topics in topological phases of quantum matter (Part II), and the origin of magnetism in various versions of the Hubbard model (Part III). Each of these topics represents certain nontrivial phenomena or features that are invariably encountered in a variety of quantum many-body systems, including quantum field theory, condensed matter systems, cold atoms, and artificial quantum systems designed for future quantum computers. The book’s main focus is on universal properties of quantum many-body systems.

The book includes roughly 50 problems with detailed solutions. The reader only requires elementary linear algebra and calculus to comprehend the material and work through the problems. Given its scope and format, the book is suitable both for self-study and as a textbook for graduate or advanced undergraduate classes.

Hal Tasaki is a Professor at Physics Department of Gakushuin University, Japan. He obtained his PhD in physics from the University of Tokyo in 1986. He joined the group of Elliott Lieb in Princeton University as a posdoc (1986-1988) and he studied on quantum spin systems, which resulted in the now famous Affleck-Kennedy-Lieb-Tasaki (AKLT) theory. In 1995, he established the existence of ferromagnetism in a nonsingular Hubbard model.  In 1997 he received the Ryogo Kubo memorial prize for his contribution to the study of quantum many-body systems. His interests also include non-equilibrium statistical mechanics and the foundations of equilibrium statistical mechanics.