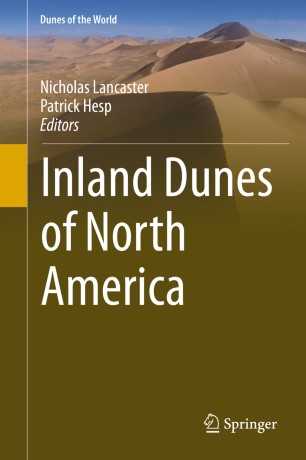 Part of the Dunes of the World book series (DUNES)

Inland sand dunes are widespread in North America and are found from the North Slope of Alaska to the Sonoran Desert in northern Mexico and from the Delmarva Peninsula in the east to Southern California in the west.   In this edited book, we highlight recent research on areas of inland dunes that span a range from those that are actively accumulating in current conditions of climate and sediment supply to those that were formed in past conditions and are now degraded relict systems.

This book will be of interest to researchers and scholars of physical geography, geomorphology, environmental sciences, and earth sciences.

Contributions include detailed analyses of individual active dune systems at White Sands, New Mexico; Great Sand Dunes, Colorado; and the Laurentian Great Lakes; as well as the vegetation-stabilized dunes of the Nebraska Sand Hills and the Colorado Plateau. Additional chapters discuss the widespread partially vegetated dune systems of the central and southern Great Plains; the relict dunes of the Atlantic Coastal Plain of the eastern USA; and active and stabilized dunes of the Colorado Plateau and the southwestern deserts of the USA and northern Mexico.

Patrick Hesp (Ph.D; DSc) is the Strategic Professor of Coastal Studies, College of Science and Engineering at Flinders University, Australia. He has held academic positions in NSW, Western Australia, Singapore, USA, and NZ, non-academic positions in the WA State Dept. of Agriculture, Geomarine P/L, and the Rottnest Island Authority, held visiting professorships and fellowships in South Africa, Namibia, Israel, Holland, China, Brazil, Italy, Malaysia, Thailand, and France, and has worked on beaches and coastal and desert dunes all over the world. He is an expert on coastal dune geomorphology, and has published over 290 articles in his career to date.
Nicholas Lancaster is Emeritus Research Professor at the Desert Research Institute, Nevada, USA.  His decades of research on sand dunes has taken him to deserts in Africa (Namib, Kalahari, northern and western Sahara), Arabia, Antarctica, and the western United States (Mojave and Sonoran Deserts).  His work has resulted in more than 150 scientific papers and several books and has been recognized by awards from the Geological Society of America, the Association of America Geographers, the International Society for Aeolian Research, the International Quaternary Association, and the Nevada System of Higher Education.