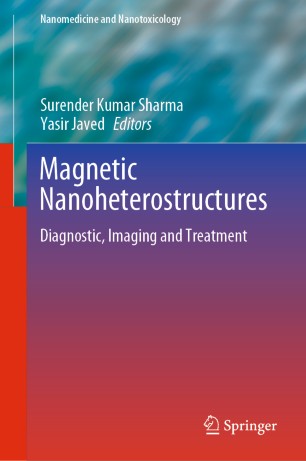 Part of the Nanomedicine and Nanotoxicology book series (NANOMED)

This book contains most updated information on synthesis of magnetic nanohybrids, their physio-chemical properties, and key biological applications. It highlights the complexity of nanoheterostructures, especially magnetic metal oxides, ferrites and doped magnetic nanomaterials, and discusses their potential applications in the early detection, imaging and treatment of cancer. It also covers the toxicity and risk assessment of multifunctional nanomaterials. Providing an overview of magnetic nanoheterostructures, it appeals to a wide audience, from beginners and graduate-level students to experts in academia and industry.

Dr. Sharma is a faculty in Materials Science at Department of Physics, Faculty of Science & Technology, The University of the West Indies (UWI), Trinidad & Tobago. Before joining UWI, he worked as a Professor Adjunto (IV) at Department of Physics, Federal University of Maranhao, Brazil (2014–2019). He has received his Ph.D. in Physics from Himachal Pradesh University, Shimla, India. He worked on different research/academic positions in Brazil, France, Czech Republic, India and Mexico from 2007-2014. His research interests include magnetic nanohybrids, their synthesis, characterization and utilization in magnetic and biomedical applications.

Dr. Javed has received his PhD degree from Universite Denis Diderot, France in 2015 under higher education commission Pakistan overseas scholarship program. He is currently working as Assistant professor in department of Physics, University of Agriculture, Faisalabad, Pakistan. His research interest based on magnetic nanomaterials for biomedical applications especially magnetic hyperthermia and MRI.