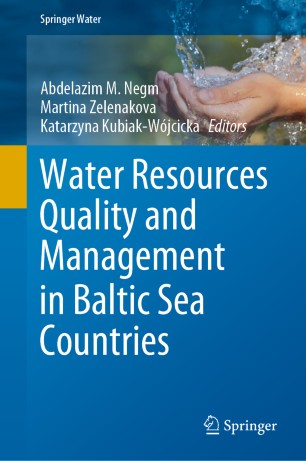 This unique book shares the knowledge and experience of experts and scientists who apply high-quality findings and input from their research to issues concerning the management of water resources and their quality in Baltic countries including Poland, Lithuania, Latvia, Germany and Russia. It summarizes the latest results of several systematic  investigations, and assesses the occurrence and quality of surface and underground waters within the Baltic countries to help decision-makers plan for sustainable development.

Prof. Abdelazim Negm is a professor of Hydraulics at the Faculty of Engineering, Zagazig University, Egypt, since 2004. He got his Ph.D. in 1992 from Zagazig University (ZU), and his M.Sc. from Ain shams University in the year 1990. He was the vice dean of the Faculty of Engineering of ZU from 12/2008 to 12/2011 and was the head of the Environmental Engineering Dept. at Egypt-Japan University of Science and Technology (E-JUST), Egypt, from October 2013 to March 2016. He participated in several international projects since 2006 until now. He published more than 350 papers in national and international journals and conferences and contributed in more than 50 chapters. Some of his papers were awarded prizes of the best papers. He is the editor of several volumes at the Springer Handbook of Environmental Chemistry Series (HEC Series). Two volumes were published in May 2017, and 10 volumes were published in the year 2019. Additional, several volumes will be published during the year 2020. He is a member of the scientific committee of several international conferences and a member of the organizing committee of others and participated in more than 80 conferences as well. He delivered several keynote talks at international conferences. Prof. Negm is a reviewer of more than international scientific journals that indexed in Scopus and WoS. He is the editor-in-Chief of EIJEST,  an associate editor of the EMJEI,  which is published by Springer. Also, he is a member of the editorial board of several scientific journals. Moreover, he is a member of the editorial board of the famous Springer Series titled “Handbook of Environmental Chemistry since 2019 and the head of the permanent scientific committee on Water Resources for the promotion of professors and associate professors (115), the supreme council of Egyptian Universities, Egypt. Prof. Negm is listed in the most famous and prestigious directories in the world including the American Biographical Institute (ABI), Inc, USA, "Marquis Who's Who in the World",  27th Ed., 2010, USA  until now and in IBC's 2000 Outstanding Intellectuals of the 21st Century by International Biographical Center, Cambridge, England, from 2011 until the present.

Dr. Martina Zeleňáková currently serves as an associate professor at the Institute of Environmental Engineering, Faculty of Civil Engineering at the Technical University of Košice. In the context of her scientific research activities she has focused on water management and environmental impact assessment. The results of her work have been published in books with Springer, journals, and conferences proceedings. She has engaged in a variety of national and international projects.

Dr. Katarzyna Kubiak-Wójcicka is a hydrologist. Acquired the PhD degree in the area of Earth sciences, geography in 2006. She works at Nicolaus Copernicus University in Toruń, Poland, at the Department of Hydrology and Water Management of the Faculty of Earth Sciences. She is the author of numerous papers on variability of river runoff with main object of interest being the Vistula river and its tributaries. Apart from scientific articles, she is experienced at hydrographic map editing and creating hydrological expert opinions for the purposes of civil courts and municipal governments.