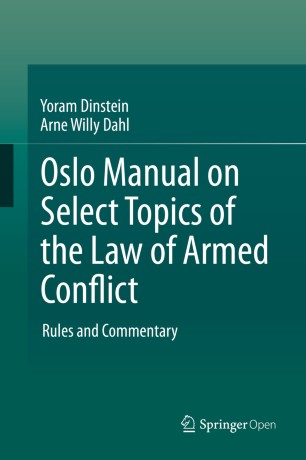 Oslo Manual on Select Topics of the Law of Armed Conflict

This open access book provides a valuable restatement of the current law of armed conflict regarding hostilities in a diverse range of contexts: outer space, cyber operations, remote and autonomous weapons, undersea systems and devices, submarine cables, civilians participating in unmanned operations, military objectives by nature, civilian airliners, destruction of property, surrender, search and rescue, humanitarian assistance, cultural property, the natural environment, and more. The book was prepared by a group of experts after consultation with a number of key governments. It is intended to offer guidance for practitioners (mainly commanding officers); facilitate training at military colleges; and inform both instructors and graduate students of international law on the current state of the law.

Yoram Dinstein is Emeritus Professor at Tel Aviv University. He is a member of the Institut de Droit International and the President of the Israel United Nations Association. In the past, he served as President, Rector and Dean of the Faculty of Law of Tel Aviv University. Prof. Dinstein is the Editor of the Israel Yearbook on Human Rights and the author of several books on the laws of war. He has served twice as the Stockton Professor of International Law at the U.S. Naval War College; a Humboldt Fellow at the Max Planck Institute for International Law (Heidelberg); a Meltzer Visiting Professor of Law at New York University; and a Visiting Professor of Law at the University of Toronto.
Arne Willy Dahl is retired Judge Advocate General for the Norwegian armed forces. He has served in public prosecution with core international crimes as his field of responsibility. From 2006 to 2012 he was president of the International Society for Military Law and the Law of War. In addition to books and a number of articles on legal issues he has authored several radio dramas and held political posts for the Christian Democratic party on municipal and county level in Norway.