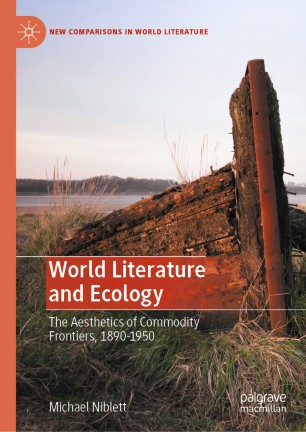 ‘This brilliant monograph offers dazzling readings of the aesthetics of sugar, cacao, coal, and oil in fiction and poetry from Trinidad, Brazil and Britain. Its analysis draws on cutting-edge world-ecology scholarship, significantly advancing theoretical understanding of key concepts such as the “commodity frontier.” The book also contributes substantially to the study of peripheral realisms and modernisms, assembling a rich corpus of canonical texts and understudied writing. It promises to become a field-defining classic of comparative environmental literary criticism.’

‘This is the book I have been waiting for: a comparative literary study grounded not in nation-states but in the world’s commodity enclaves. Moving adroitly between the coal pits of Wales, cacao fields of Brazil and sugar plantations of Trinidad, Niblett uncovers and brilliantly analyzes a global literature of commodity frontiers and their environmental effects.’

Located at the intersection of world-literary studies and the environmental humanities, this book analyses how fiction and poetry respond to the ecological transformations entailed by commodity frontiers. Examining the sugar, cacao, coal, and oil frontiers in Trinidad, Brazil, and Britain, World Literature and Ecology shows how literary texts have registered the relationship between the re-making of biophysical natures and struggles around class, race, and gender. It combines a materialist theory of world-literature with the insights of the world-ecology perspective to generate compelling new readings of writers such as Rhys Davies, Yseult Bridges, Lewis Jones, José Lins do Rego, Ellen Wilkinson, Jorge Amado, Gwyn Thomas, and Ralph de Boissière. The book represents a timely intervention into a series of field-defining debates around peripheral realisms and modernisms, ecocriticism, and the energy humanities.

Michael Niblett is Associate Professor in Modern World Literature at the University of Warwick, UK. He has written extensively on world literature, postcolonial studies, and ecocriticism. His previous books include The Caribbean Novel since 1945 (2012).