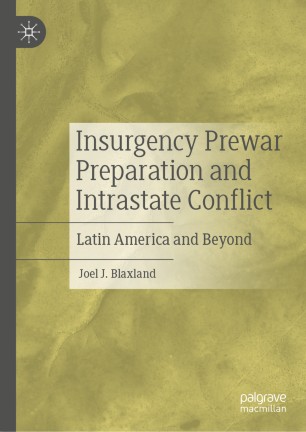 Latin America and Beyond

‘Whereas existing studies of insurgency and internal conflict investigate the wartime determinants of success and failure, this book shifts the focus to the period of prewar preparation. Calling this phase incubation, Joel Blaxland shows that insurgents who undertake effective and sustained pre-war planning are more likely to enjoy success once conflict with the state begins, as reflected in the duration of their survival. Combining statistical analysis of a novel dataset on the incubation periods of more than 120 insurgencies with careful studies of contemporary and historical cases, the book adds a new variable to our understanding of variation in the success of insurgency, and suggests that the broader scholarship on conflict would benefit theoretically and empirically from greater attention to the preparations insurgents take before the onset of conflict.’

This book provides a new approach to explaining prolonged rebellions and insurgent wars, as well as a more nuanced and multi-faceted account of the entire lifespans of rebel and insurgent groups. Since 1945, rebel and insurgent groups have increasingly dragged larger, better funded, and ostensibly militarily superior regimes into protracted intrastate conflicts. This book demonstrates how they were able to endure the hardships of warfare thanks to decisions made before the conflict erupted––a period of time the author refers to as “incubation.” Using case studies on Latin American insurgencies, the author demonstrates that their capacity to endure was directly associated with both the length and quality of each group’s prewar preparations.