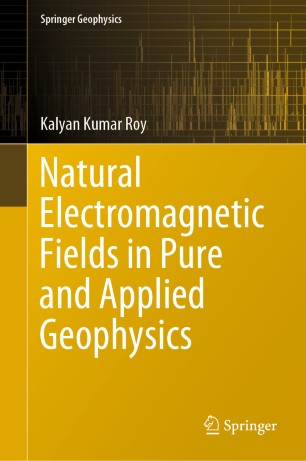 This research monograph discusses all the branches of geophysics based on natural electromagnetic fields and their associated subjects. Meant for postgraduate and research level courses, it includes research guidance and collection of magnetotelluric data in some parts of Eastern India and their qualitative and quantitative interpretation. Specific topics highlighted include (i) Electrotellurics, (ii) Magnetotellurics, (iii) Geomagnetic Depth Sounding and Magnetometer Array Studies, (iv) Audio Frequency Magnetotellurics and Magnetic Methods, (v) Marine Magnetotelluric and Marine Controlled Source Electromagnetic Methods, (vi) Electrical Conductivity of Rocks and Minerals and (vii) Mathematical Modelling and Some Topics on Inversion needed for Interpretation of Geoelectrical Data.

Kalyan Kumar Roy helds  M.Sc and Ph.D from the Department of Geology and Geophysics , Indian Institute of Technology, Kharagpur, West Bengal, India. In 1966,he joined as a faculty member in the same department. In 1975 Dr. Roy was offered post doctorate fellowship  of the National Research Council of Canada,  by the Department of Environment , Ottawa, Canada for a period of one year. He returned from Canada  and joined the same department as a faculty member. He retired as a Professor of Geophysics in the year 2002 after 36 years of service. He then served as an Emeritus Scientist in the Department of Geological Sciences, Jadavpur University, Kolkata from 2003 to 2009 and as an Adjunct Professor at IIT,Kharagpur from 2010 to 2011. He was a Guest Professor of the Department of Applied Geology, Dibrugarh University , Assam from 2013 to 2015. He joined as a Visiting Professor in the Department of Earth Sciences, Indian Institute of Engineering Science and Technology, Shibpur, Howrah, West Bengal, India  in 2011 and continued upto 2019. He has published 77 papers, one single authorship book, one edited volume of multi authorship book  and contributed in several multi aurhored books.
Dr.Roy was selected as a fellow of the National Academy of Science and fellows and life members of all the important Earth Science Societies of India. He is a life member of the Society of Petroleum Geophysicists based in Houston Texas, USA and Dehradun, Uttarakhand,I ndia. He attended many international conferences organized by I.U.G.G. (International Union of Geodesy and Geophysics),I.G.C.(International Geological Congress) and Electromagnetic workshops.