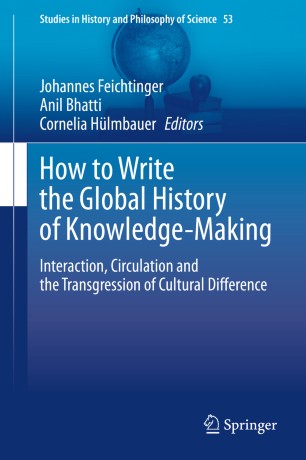 How to Write the Global History of Knowledge-Making

Interaction, Circulation and the Transgression of Cultural Difference

Part of the Studies in History and Philosophy of Science book series (AUST, volume 53)

This multidisciplinary collection of essays provides a critical and comprehensive understanding of how knowledge has been made, moved and used, by whom and for what purpose. To explain how new knowledge emerges, this volume offers a two-fold conceptual move: challenging both the premise of insurmountable differences between confined, autarkic cultures and the linear, nation-centered approach to the spread of immutable stocks of knowledge. Rather, the conceptual focus of the book is on the circulation, amalgamation and reconfiguration of locally shaped bodies of knowledge on a broader, global scale. The authors emphasize that  the histories of interaction have been made less transparent through the study of cultural representations thus distorting the view of how knowledge is actually produced.

Leading scholars from a range of fields, including history, philosophy, social anthropology and comparative culture research, have contributed chapters which cover the period from the early modern age to the present day and investigate settings in Africa, Asia, and Europe. Their particular focus is on areas that have largely been neglected until now. In this work, readers from many disciplines will find new approaches to writing the global history of knowledge-making, especially historians, scholars of the history and philosophy of science, and those in culture studies.

Johannes Feichtinger is a Senior Research Associate at the Austrian Academy of Sciences, and teaches history at the University of Vienna. He specializes in the history and philosophy of science, history of knowledge and culture studies. His publications include two monographs: Wissenschaft als reflexives Projekt. Von Bolzano über Freud zu Kelsen. Österreichische Wissenschaftsgeschichte 1848–1938 (2010), and Wissenschaft zwischen den Kulturen. Österreichische Hochschullehrer in der Emigration 1933–1945 (2001), numerous co-edited volumes, among them Habsburg Postcolonial (2003), Deploying Orientalism in Culture and History. From Germany to Central and Eastern Europe (2013), and Understanding Multiculturalism. The Habsburg Central European Experience (2014).

Anil Bhatti is Professor Emeritus at the JNU New Delhi. He specializes in the theory of literature and culture theory, modern German and comparative literature and comparative culture studies between Europe (Germany, Austria, Switzerland) and India/Asia, orientalism and postcolonial studies. His main publications include coedited volumes on Kulturelle Identität. Deutsch-indische Kulturkontakte in Literatur, Religion und Politik (1997), Reisen, Entdeckungen, Utopien (1998), Jewish Exile in India (1999), and the recently published Similarity. A Paradigm for Culture Theory (2018, in German 2015). He has published a large number of articles focusing on Language, Homogeneities, Heterogeneities and Similarity, and he holds numerous international fellowships, awards and honors, including the Research Award of the Alexander von Humboldt Foundation.

Cornelia Hülmbauer was a Junior Research Associate at the Austrian Academy of Sciences from 2013 to 2018. She obtained a PhD from the University of Vienna with a dissertation on English as a Lingua Franca in European multilingualism. Specializing in lingua-cultural diversity and translingual practices, philosophy of language and culture studies, she worked as a researcher for the European FP6 project DYLAN – Language Dynamics and Management of Diversity as well as for the international network project Toolkit for Transnational Communication. She was co-editor of the volume Mehrsprachigkeit aus der Perspektive zweier EU-Projekte: DYLAN meets LINEE (2010) and has published various articles in international journals.