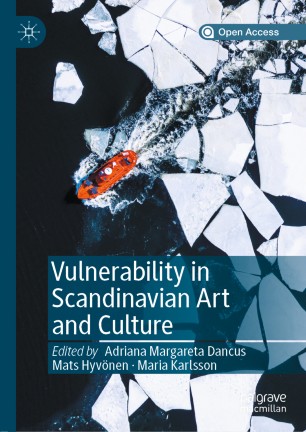 Vulnerability in Scandinavian Art and Culture

In this open access book, seventeen scholars discuss how contemporary Scandinavian art and media have become important arenas to articulate and stage various forms of vulnerability in the Scandinavian welfare states. How do discourses of privilege and vulnerability coexist and interact in Scandinavia? How do the Scandinavian countries respond to vulnerability given increased migration? How is vulnerability distributed in terms of margin and centre, normality and deviance? And how can vulnerability be used to move audiences towards each other and accomplish change? We address these questions in an interdisciplinary study that brings examples from celebrated and provocative fiction and documentary films, TV-series, reality TV, art installations, design, literature, graphic art, radio podcasts and campaigns on social media.

Adriana Margareta Dancus is Associate Professor at the University of South-Eastern, Norway. Dancus researches at the crossroads of gender and ethnicity studies, with a focus on contemporary Scandinavian film and literature. She is the author of Exposing Vulnerability: Self-Mediation in Scandinavian Films by Women (2019).

Mats Hyvönen is a Media scholar at Uppsala University, Sweden, and coordinator for the Engaging Vulnerability Research Program. Hyvönen’s research interests are mainly in media history, especially the study of the public sphere as a vulnerable space and how the media both resist and facilitate that vulnerability. Recent publications include (as editor and contributor) Post-Truth, Fake News: Viral Modernity & Higher Education (Springer, 2018).

Maria Karlsson is a Literature scholar at Uppsala University, Sweden, and is on the Engaging Vulnerability Research Program’s advisory board. She has worked on women’s fin-de-siécle novels, audiences, and media dramaturgy. At present, she works on charity and readers; on provocative art in media and politics, and on Swedish radio documentaries.