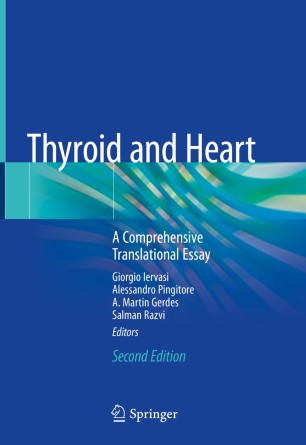 In recent years, several scientific papers have highlighted the role of the thyroid system in cardioprotection, and several clinical studies – including multicenter studies – have identified the role of thyroid hormones (TH) in the development and progression of cardiovascular disease, making an update of TH and heart relationship both necessary and timely.
This second edition of Thyroid and Heart failure provides a careful and updated review of the experimental, clinical and epidemiological results in the field of TH and heart failure, with a particular focus on the translational - bench to bedside - significance of the obtained results. It discusses topics such as the molecular, structural, functional, cellular and histological cardiac changes; the reversibility of these changes with TH replacement therapy; the systemic effects – kidney, hormonal pathways systems, brain, muscle, etc – of altered TH metabolism in HF, as well as the clinical and prognostic implications. The  section devoted to the potential  therapeutic treatments has been expanded.
Thanks to its translational approach to this highly complex subject, the book will be  of interest to a broad readership, including cardiologists, endocrinologists and internists.

Giorgio Iervasi is Director of the CNR Institute of Clinical Physiology (IFC). He received his MD from the University of  Pisa. In 1998, he was named Chief of Cardiovascular Endocrine Research and the Clinical Physiology Unit,  and from 2007 of the G. Monasterio Foundation,  CNR, Tuscany Region.   His research is focused on the cardio-endocrine metabolic area; special attentions has been devoted in the last 15-20 years to the understanding of the pathogenic role and clinical implications of mild thyroid dysfunction in cardiac disorders, particularly low T3 syndrome as a biomarker of poor prognosis and as a crucial contributing factor of disease mechanisms favouring the progression of heart failure.  He is the coeditor of the first edition of Thyroid and Heart failure. In 2003, he received the “Featured Article of the Month” award from the AEHA International Society for his paper on low T3 syndrome in heart failure.

Alessandro Pingitore graduated in Medicine and Surgery, and received a PhD in Cardiovascular Physiopathology and a postdoctoral qualification in Cardiovascular Disease. He is currently a permanent scientist at the CNR  Institute of Clinical Physiology. His main research fields are the assessment of cardiac function and morphology using non-invasive cardiac imaging, the relationship between thyroid hormone and the heart, and the physiological response to strenuous physical stress in normal or extreme environments.

Martin A. Gerdes is Professor of Medicine and Department Chair. In his early career he developed accurate methods to evaluate myocyte remodelling to better understand the relationship between myocyte shape and cardiac function during physiological and pathological growth of the heart. He discovered that changes in myocyte length and width correlate with changes in chamber circumference and wall thickness respectively and that the increase in chamber diameter/wall thickness ratio with progression to dilated heart failure is due to excessive myocyte lengthening from series addition of sarcomeres with no change in myocyte diameter.

SALMAN RAZVI is a senior lecturer in Endocrinology at Newcastle University and a consultant endocrinologist at Queen Elizabeth Hospital. His doctoral thesis was based on assessing cardiovascular risk in subclinical hypothyroidism. Subsequent to this, he has continued to pursue research evaluating the action of thyroid hormones particularly on the cardiovascular system. The focus of his research has been on investigating the association between thyroid function and cardiovascular events in various populations. He is the chief investigator of several projects funded by various statutory funding bodies as well as charities. He has authored more than 70 peer-reviewed publications, mainly relating to thyroid dysfunction.