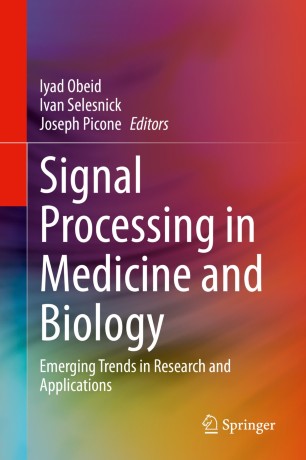 Signal Processing in Medicine and Biology

Emerging Trends in Research and Applications

This book covers emerging trends in signal processing research and biomedical engineering, exploring the ways in which signal processing plays a vital role in applications ranging from medical electronics to data mining of electronic medical records. Topics covered include statistical modeling of electroencephalograph data for predicting or detecting seizure, stroke, or Parkinson’s; machine learning methods and their application to biomedical problems, which is often poorly understood, even within the scientific community; signal analysis; medical imaging; and machine learning, data mining, and classification. The book features tutorials and examples of successful applications that will appeal to a wide range of professionals and researchers interested in applications of signal processing, medicine, and biology.

Iyad Obeid, PhD, is an Associate Professor of Electrical and Computer Engineering at Temple University with a secondary appointment in the Department of Bioengineering. His research interests include neural signal processing, biomedical signal processing, and medical instrumentation. His research in these fields has been funded by NIH, NSF, DARPA, and the US Army. Together with Dr. Picone, he is the co-founder of the Neural Engineering Data Consortium, whose goal is to provide large, well curated neural signal data to the biomedical research community. In addition to earlier work on brain machine interfaces, Dr. Obeid’s current research has expanded to include non-parametric unsupervised machine learning as well as concussion and injury assessment instrumentation built using commercial off the shelf sensors.
Ivan Selesnick, PhD, is Department Chair and Professor of Electrical and Computer Engineering at NYU Tandon School of Engineering. He received the BS, MEE, and PhD degrees in Electrical Engineering from Rice University, and joined Polytechnic University in 1997 (now NYU Tandon School of Engineering). He received an Alexander von Humboldt Fellowship in 1997 and a National Science Foundation Career award in 1999. In 2003, he received the Jacobs Excellence in Education Award from Polytechnic University. Dr. Selesnick’s research interests are in signal and image processing, wavelet-based signal processing, sparsity techniques, and biomedical signal processing. He became an IEEE Fellow in 2016, and has been an associate editor for the IEEE Transactions on Image Processing, IEEE Signal Processing Letters, IEEE Transactions on Signal Processing, and IEEE Transactions on Computational Imaging.
Joseph Picone, PhD, is a Professor of Electrical and Computer Engineering at Temple University, where he directs the Institute for Signal and Information Processing and is the Associate Director of the Neural Engineering Data Consortium. His primary expertise is in statistical modeling with applications in signal processing, specifically acoustic modeling in speech recognition. A common theme throughout his research career has been a focus on fundamentally new statistical modeling paradigms. He has been an active researcher in various aspects of speech processing for over 35 years. He currently collaborates with the Temple School of Medicine and has previously collaborated with many academic institutions (e.g., the Linguistic Data Consortium, Johns Hopkins), government agencies (e.g., Department of Defense, DARPA) and companies (e.g., MITRE, Texas Instruments). The National Science Foundation, DoD, DARPA and several commercial interests have funded his research. He has published over 200 technical papers and holds 8 patents.