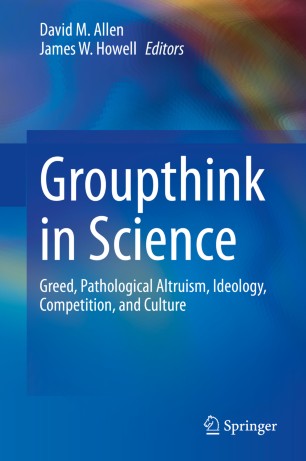 This book discusses one of the hottest topics in science today, i.e., the concern over certain problematic practices within the scientific enterprise. It raises questions and, more importantly, begins to supply answers about one particularly widespread phenomenon that sometimes impedes scientific progress: group processes. The book looks at many problematic manifestations of “going along with the crowd” that are adopted at the expense of truth. Closely related is the concept of pathological altruism or altruism bias—the tendency of scientists to bias their research in order to further the ideological or financial interests of an “in-group” at the expense of both the interest of other groups as well as the truth. The book challenges the widespread notion that science is invariably a benevolent, benign process. It defines the scientific enterprise, in practice as opposed to in theory, as a cultural system designed to produce factual knowledge. In effect, the book offers a broad and unique take on an important and incompletely explored subject: research and academic discourse that sacrifices scientific objectivity, and perhaps even the scientist’s own ethical standards, in order to further the goals of a particular group of researchers or reinforce their shared belief system or their own interests, whether economic, ideological, or bureaucratic.

David M. Allen, M.D.  is a board-certified psychiatrist and professor emeritus of psychiatry at the University of Tennessee Health Science Center in Memphis. He received his medical degree from the University of California San Francisco in 1974 and completed his psychiatric residency at the University of Southern California Medical Center. He is the former director of psychiatric residency training at the University of Tennessee Health Science Center in Memphis, a position he held for 16 years. Additionally, he has done research into personality disorders and is a psychotherapy theorist. He is the author of three books for psychotherapists: A Family Systems Approach to Individual Psychotherapy, Deciphering Motivation in Psychotherapy, and Psychotherapy with Borderline Patients: an Integrated Approach. Dr. Allen developed a model of psychotherapy called unified therapy, a treatment designed to alter dysfunctional relationship patterns between adults and their primary attachment figures which he believes trigger and reinforce repetitive self-defeating and self-destructive behavior patterns.

James William Howell holds a Ph.D. in neurobiology and behavior from Cornell University. Besides his study and work with the Atomic Energy Commission (now the Nuclear Regulatory Commission) at the University of Puerto Rico and Cornell University, Dr. Howell has held teaching and research positions at Frederick College, Cornell University, and Baylor College of Medicine. His work at Baylor was primarily with the Department of Psychiatry’s Sex and Marriage Clinic and the Sleep Laboratory. Currently he is on the adjunct faculties of the Department of Psychiatry and the Department of Preventive Medicine of the College of Medicine at the University of Tennessee Health Science Center in Memphis. Dr. Howell is the author of several books, book chapters, scientific papers, and articles. In addition to his scientific work, he has published three books and two dozen articles on design. He is a neurobiologist at The Urban Child Institute. The focus of his work is the combined effect of memory, consciousness, sexuality, and perception on the changing self.