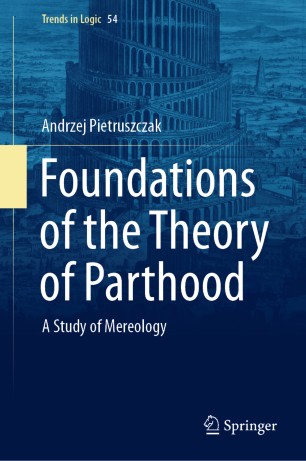 Foundations of the Theory of Parthood

A Study of Mereology

Part of the Trends in Logic book series (TREN, volume 54)

This is the first book to systematically study the weak systems of mereology. In its chapters, the author critically analyzes and explains core topics related to mereology, such as parthood without antisymmetry, non-existence of the zero element, and Leśniewski's notion of class and set.
The book also delves into three theories of parthood: two concern the sum existence axioms, and the third contends with transitivity of parthood.
This is the first systematic analysis of systems of mereology of its kind and is suitable for students, scholars, logicians, and mathematicians who wish to further their knowledge of mereology.
Original polish publication “Podstawy teorii części” by The Nicolaus Copernicus University Press

Andrzej Pietruszczak obtained M.Sc. in mathematics at the University of Łódź in Poland. After graduation, he started working in the Department of Logic of Nicolaus Copernicus University in Toruń, Poland, where he wrote his dissertation in logic and later habilitated and received full professorship on the basis of his work in mereology. He is employed in the department to this day. Andrzej Pietruszczak is an author of 4 books and 78 papers in mereology, modal logic, classical logic, logic of names, and point-free geometry and topology. Since 1993, he has been an editor-in-chief of Logic and Logical Philosophy.