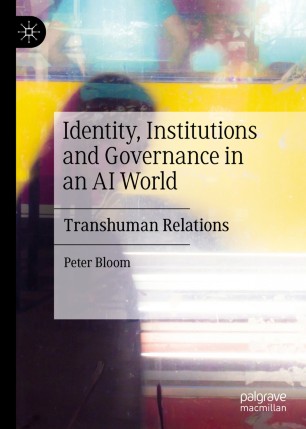 Identity, Institutions and Governance in an AI World

The 21st century is on the verge of a possible total economic and political revolution. Technological advances in robotics, computing and digital communications have the potential to completely transform how people live and work. Even more radically, humans will soon be interacting with artificial intelligence (A.I.) as a normal and essential part of their daily existence. What is needed now more than ever is to rethink social relations to meet the challenges of this soon-to-arrive "smart" world. This book proposes an original theory of trans-human relations for this coming future. Drawing on insights from organisational studies, critical theory, psychology and futurism - it will chart for readers the coming changes to identity, institutions and governance in a world populated by intelligent human and non-human actors alike. It will be characterised by a fresh emphasis on infusing programming with values of social justice, protecting the rights and views of all forms of "consciousness" and creating the structures and practices necessary for encouraging a culture of "mutual intelligent design". To do so means moving beyond our anthropocentric worldview of today and expanding our assumptions about the state of tomorrow's politics, institutions, laws and even everyday existence. Critically such a profound shift demands transcending humanist paradigms of a world created for and by humans and instead opening ourselves to a new reality where non-human intelligence and cyborgs are increasingly central.
Peter Bloom is Professor of Management at the University of Essex, UK. He is the author of a number of books including Authoritarian Capitalism in the Age of Globalization, Beyond Power and Resistance: Politics at the Radical Limits, The Ethics of Neoliberalism: The Business of Making Capitalism Moral, The Bad Faith in the Free Market: The Radical Promise of Existential Freedom, The CEO Society: The Corporate Takeover of Everyday Life, Monitored: Business and Surveillance in Time of Big Data. His writing has been additionally featured in top international and national media outlets such as The Washington Post, The Guardian, and The Independent, The New Statesmen, The Week, The Conversation and Open Democracy among others.