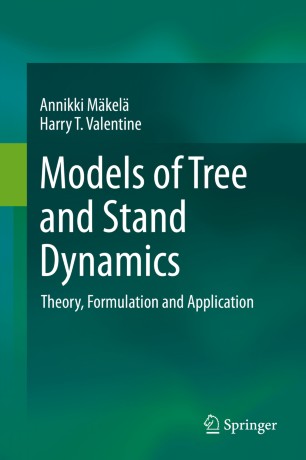 Models of Tree and Stand Dynamics

The book is designed to be a textbook for university students (MSc-PhD level) and a reference for researchers and practitioners. It is an introduction to dynamic modelling of forest growth based on ecological theory but aiming for practical applications for forest management under environmental change. It is largely based on the work and research findings of the authors, but it also covers a wide range of literature relevant to process-based forest modelling in general. The models presented in the book also serve as tools for research and can be elaborated further as new research findings emerge.

The material in the book is arranged such that the student starts from basic concepts and formulations, then moves towards more advanced theories and methods, finally learning about parameter estimation, model testing, and practical application. Exercises with solutions and hands-on R-code are provided to help the student digest the concepts and become proficient with the methods. The book should be useful for both forest ecologists who want to become modellers, and for applied mathematicians who want to learn about forest ecology.

The basic concepts and theory are formulated in the first four chapters, including a review of traditional descriptive forest models, basic concepts of carbon balance modelling applied to trees, and theories and models of tree and forest structure. Chapter 5 provides a synthesis in the form of a core model which is further elaborated and applied in the subsequent chapters. The more advanced theories and methods in Chapters 6 and 7 comprise aspects of competition through tree interactions, and eco-evolutionary modelling, including optimisation and game theory, a topical and fast developing area of ecological modelling under climate change. Chapters 8 and 9 are devoted to parameter estimation and model calibration, showing how empirical and process-based methods and related data sources can be bridged to provide reliable predictions. Chapter 10 demonstrates some practical applications and possible future development paths of the approach.

The approach in this book is unique in that the models presented are based on ecological theory and research findings, yet sufficiently simple in structure to lend themselves readily to practical application, such as regional estimates of harvest potential, or satellite-based monitoring of growth. The applicability is also related to the objective of bridging empirical and process-based approaches through data assimilation methods that combine research-based ecological measurements with standard forestry data. Importantly, the ecological basis means that it is possible to build on the existing models to advance the approach as new research findings become available.

Annikki Mäkelä earned her MSc in Engineering (1980) and Licentiate Tech. (1982) in Systems Theory at the Helsinki University of Technology (HUT), and PhD in Forestry (1988) at the University of Helsinki (UH). After her graduation she held several research positions at HUT’s Systems Theory Lab and UH’s Department of Silviculture (later Forest Ecology, then Forest Sciences), many of them funded by the Academy of Finland. She was appointed  Professor of Silviculture/Applied Forest Ecology at UH in 2005. Dr. Mäkelä has primary research interests in the area of growth, production, carbon balance and population dynamics of boreal forests and practical applications of quantitative models to forest management. She leads the Forest Modelling Group at the UH Department of Forest Sciences where she also teaches undergraduate and graduate courses on modelling tree and stand growth.  She has been involved in several national, European and global research projects and networks developing and using forest models, with a strong focus on scaling issues and regional applications of process-based models to management questons under climate change. Harry T. Valentine earned a B.S. in forestry at Rutgers University in 1970, and then emerged from Yale University with an M.F., Ph.D., and budding interests in sampling, modelling, and forest ecology.  He spent his entire professional career as a scientist with the Northern Research Station, USDA Forest Service, starting in 1974 and ending with his retirement in 2016.  The first decade of Dr. Valentine's career was spent working on forest insect and disease problems.  After 1984, most of his research was concerned with either:  a) devising new methods for sampling attributes of trees or forests, or b) achieving a balance between process and applicability in process-based models of trees and stands.  Dr. Valentine is co-author, with T.G. Gregoire, of a book entitled:  Sampling Strategies for Natural Resources and the Environment.