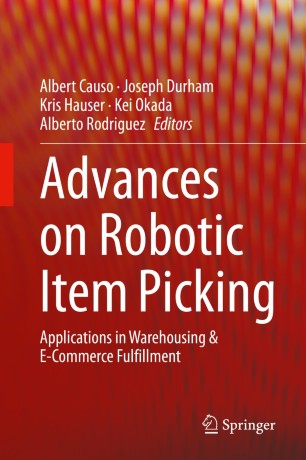 This book is a compilation of advanced research and applications on robotic item picking and warehouse automation for e-commerce applications. The works in this book are based on results that came out of the Amazon Robotics Challenge from 2015-2017, which focused on fully automated item picking in warehouse setting, a topic that has been assumed too complicated to solve or has been reduced to a more tractable form of bin picking or single-item table top picking. The book’s contributions reveal some of the top solutions presented from the 50 participant teams. Each solution works to address the time-constraint, accuracy, complexity, and other difficulties that come with warehouse item picking. The book covers topics such as grasping and gripper design, vision and other forms of sensing, actuation and robot design, motion planning, optimization, machine learning and artificial intelligence, software engineering, and system integration, among others. Through this book, the authors describe how robot systems are built from the ground up to do a specific task, in this case, item picking in a warehouse setting. The compiled works come from the best robotics research institutions and companies globally.

Joey Durham is Manager of Research and Advanced Development at Amazon Robotics. His team focuses on resource allocation algorithms, machine learning, and path planning for robotic warehouses. He also runs the Amazon Picking Challenge robotic manipulation contest. Joey joined Kiva Systems after completing his Ph.D. at the University of California at Santa Barbara in distributed coordination for teams of robots. He has been with the company through its acquisition and growth into Amazon Robotics. Previously he worked on path planning for autonomous vehicles at Stanford University for the DARPA Grand Challenge.

Kris Hauser is an Associate Professor at the Pratt School of Engineering at Duke University with a joint appointment in the Electrical and Computer Engineering Department and the Mechanical Engineering and Materials Science Department. He received his PhD in Computer Science from Stanford University in 2008, bachelor's degrees in Computer Science and Mathematics from UC Berkeley in 2003, and worked as a postdoctoral fellow at UC Berkeley. He then joined the faculty at Indiana University from 2009-2014, where he started the Intelligent Motion Lab. He is a recipient of a Stanford Graduate Fellowship, Siebel Scholar Fellowship, and the NSF CAREER award.

Kei Okada received the MS and the PhD in Information Engineering from The University of Tokyo in 1999 and 2002, respectively. From 2002 to 2006, he joined the Professional Programme for Strategic Software Project in The University Tokyo. Since March 2006, he has been an assistant professor in Creative Informatics at The University of Tokyo. His research interests include humanoids robots, real-time 3D computer vision, and recognition-action integrated system. He is a member of IEEE, Information Processing Society of Japan and the Robotics Society of Japan.

Alberto Rodriguez graduated in Mathematics and Telecommunication Engineering, with honors, from the Universitat Politecnica de Catalunya (UPC) in Barcelona. He earned a Ph.D. in Robotics from Carnegie Mellon University under the supervision of Professor Matthew T. Mason. His thesis was entitled "Shape for Contact.” He is currently a Postdoctoral Associate at the Computer Science and Artificial Intelligence Laboratory at MIT. Alberto is the recipient of La Caixa and Caja Madrid Fellowships for graduate studies in the U.S., and the recipient of Best Student Paper Awards from conferences RSS 2011 and ICRA 2013. His main research interests are in robotic manipulation, mechanical design, and automation. His long-term research goal is to provide robots with enough sensing, reasoning and acting capabilities to reliably manipulate the environment.