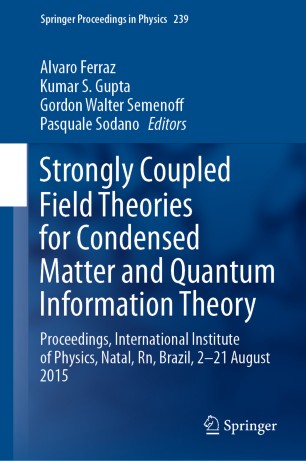 This book presents a selection of advanced lectures from leading researchers, providing recent theoretical results on strongly coupled quantum field theories. It also analyzes their use for describing new quantum states, which are physically realizable in condensed matter, cold-atomic systems, as well as artificial materials. It particularly focuses on the engineering of these states in quantum devices and novel materials useful for quantum information processing.

The book offers graduate students and young researchers in the field of modern condensed matter theory an updated review of the most relevant theoretical methods used in strongly coupled field theory and string theory. It also provides the tools for understanding their relevance in describing the emergence of new quantum states in a variety of physical settings.

Alvaro Ferraz obtained his D.Phil. from the University of Oxford and became a Full Professor of Physics at the University of Brasília in 2003. In 2010, he moved to the Federal University of Rio Grande do Norte to direct the International Institute of Physics in Natal. His research focuses mainly on strongly interacting electronic systems.

Kumar S. Gupta is a theoretical physicist working at Saha Institute of Nuclear Physics in Kolkata, India. He obtained his Ph.D. degree from Syracuse University, USA, and undertook postdoctoral research at the University of Rochester and at Iowa State University. His research interests include non-equilibrium dynamics, entanglement entropy, quantum aspects of black holes, and topological quantum field theories.

Gordon Walter Semenoff holds a Ph.D. from the University of Alberta, was a Postdoctoral Fellow at the Massachusetts Institute of Technology, and has been a Professor of Physics at the University of British Columbia since 1990. He is a Fellow of the Royal Society of Canada and an Officer of the Order of Canada. He is known for his work on quantum field theory, string theory and theoretical elementary particle and condensed matter physics.

Pasquale Sodano holds a Ph.D. from the University of Alberta (Canada) and a master’s degree from the University Federico II in Naples (Italy). He undertook postdoctoral research at the Massachusetts Institute of Technology (U.S.A.). He has been long-term Visiting Researcher at Los Alamos National Laboratories (U.S.A.), at Perimeter Institute (Canada), at the Max Planck Institute for Complex Systems (Germany), and at the International Institute of Physics in Natal (Brazil). He has been a Full Professor of Theoretical Physics at the University of Perugia in Italy since 1990. His more recent research interests are in the field of quantum field theory of condensed matter systems.