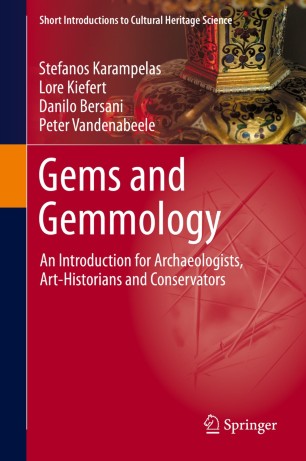 An Introduction for Archaeologists, Art-Historians and Conservators

This book provides a lucid introduction to the basics of gemmology. It familiarizes archaeologists, art historians and conservators with the science of gemstones and allows them to understand the basic concepts of their provenance, typology and treatments.

Which are the main types of gems? What treatments can be applied? How does one analyse gems? How can gems contribute to archaeometrical research?

This volume is written by four experts in the fields of gemmology and archaeometry and addresses both students who need an introduction to this field and professionals who want to refresh their knowledge of the topic. This work is part of a series of introductory texts that deal with a broad range of materials-related topics in archaeometry.

Stefanos Karampelas is Research Director for the Bahrain Institute for Pearls and Gemstones (DANAT) as well as a lecturer for the Advanced Gemmology Diploma at the University of Nantes, France, on pearls, laboratory methods applied to gems as well as origin determination of coloured gems. He holds a PhD in Materials Physics from the University of Nantes (France) and the Aristotle University of Thessaloniki (Greece), an Advanced Gemmology Diploma from the University of Nantes, a MSc in Geosciences from the same university and a BSc in Geology from Aristotle University of Thessaloniki. He has experience as a Research Scientist for a period of seven years at Gubelin Gem Lab with a further year at Gem Research Swisslab, both in Switzerland. His research interests include advanced non-destructive techniques applied to gem materials. He has published numerous peer-reviewed articles in scientific journals, contributed to books, visited several gem mines and pearl farms around the globe. Stefanos is also frequently delivering lectures to international scientific conferences and gemmological meetings. He is a member of the Commission of Gem Materials of International Mineralogical Association, delegate for the International Gemmological Conference as well as member of the Editorial Board of Gems and Gemology and an Associate Editor of The Journal of Gemmology.

Lore Kiefert is Chief Gemmologist at Gübelin Gem Lab, where she is, among other tasks, responsible for the training of gemmologists. She started studying Mineralogy in Heidelberg, Germany, in 1981 and completed her Master's thesis on the origin of sapphires in 1987. She then moved to Australia to study themineralogical and chemical composition of desert dust, which earned her a PhD in 1996. Leaving Australia for Switzerland in 1994, she joined the SSEF Swiss Gemmological Institute as Deputy Director and went on to become its Director of the Coloured Stones Department as well. During her time at the SSEF, she completed her FGA Diploma in 1998. In 2005, Lore moved to New York to head the AGTA Gemmological Testing Center as Laboratory Director until she decided to return to Europe to join the Gubelin Gem Lab as Chief Gemmologist in October 2009.

She has authored and co-authored over 100 publications in gemmological and scientific journals, as well as chapters in textbooks such as the Handbook of Raman Spectroscopy. She regularly delivers gemmological lectures at conferences worldwide and has co-organised two gemmological conferences in Switzerland and the USA. Lore is also on the editorial review board of Gems & Gemology and the Journal of Gemmology, as well as member of the LMHC. Dr. Kiefert was awarded professorship at Tongji University in Shanghai, China in 2017, where she regularly conducts workshops and lectures.

Danilo Bersani is associate professor in physics at the University of Parma, Italy, Department of Mathematical, Physical and Computer Science. His research is mostly devoted to the spectroscopic analysis of gems, minerals, nanocrystalline materials, objects related to art and archaeology, in particular by means of Raman spectroscopy. He is author of more than 150 scientific publications in international journals and has given more than 250 presentations at international conferences. Organizer and member of the scientific committees of different international conferences, such as GeoRaman, inArt, RAA (Applications of Raman Spectroscopy in Art and Archaeology).

Peter Vandenabeele is professor in archaeometry at Ghent University, Belgium. He is member of the department of archaeology and associated member of the department of chemistry. In 2000, he obtained his PhD in analytical chemistry with research on the application of Raman spectroscopy and total-reflection X-ray fluorescence for the analysis of art objects. His research mainly focusses on the development and optimisation of spectroscopic techniques for archaeometrical applications. He authored the handbook ‘Practical Raman Spectroscopy: An Introduction’ and co-edited several other books. He is author of peer-reviewed research papers and frequently presents his recent research in international scientific conferences and is chairman and committee member of international conferences in the fields of art analysis and Raman spectroscopy.