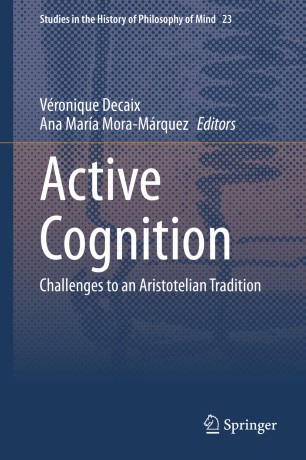 Challenges to an Aristotelian Tradition

Part of the Studies in the History of Philosophy of Mind book series (SHPM, volume 23)

This edited work draws on a range of contributed expertise to trace the fortune of an Aristotelian thesis over different periods in the history of philosophy. It presents eight cases of direct or indirect challenges to the Aristotelian passive account of human cognition, taking the reader from late antiquity to the 20th century. Chapters analyse the (often indirect) effect of Aristotle’s account of cognition on later periods. In his influential De anima, Aristotle describes human cognition, both sensitive and intellectual, as the reception of a form in the cognitive subject.

Aristotle’s account has been commonly interpreted as fundamentally passive – the cognitive subject is a passive actor upon which a cognitive process is acted by the object. However, at least from the time of Alexander of Aphrodisias onwards, this interpretation has been challenged by authors who posit a fundamental active aspect of cognition. Readers will discover how one or more of three concerns – ontological superiority, direct realism and moral responsibility – drive the active accounts of cognition. Contributed chapters from top scholars examine how these three concerns lead thinkers to take issue with the idea that cognition is a passive process. The authors consider Jesuit accounts of cognition, Malebranche on judgment, and Wittgenstein on perception, as well as Stumpf on active cognition, among other relevant works. This book is ideally suited to scholars of philosophy, especially those with an interest in medieval epistemology, the influence of Aristotle, philosophy of mind and theories of cognition.

Véronique Decaix is Associate Professor in Medieval Philosophy at University Paris 1 Panthéon-Sorbonne. Her research interests are psychology, theories of cognition and metaphysics. In the framework of GRAMATA, UMR 7219 (Groupe Antiquité, Moyen Âge, Transmission Arabe) she is currently leading the research project “Memoria” on “Ancient and Medieval Theories of Memory”).

Ana María Mora-Márquez is docent in Theoretical Philosophy at University of Gothenburg. She is the author of the book The Thirteenth-Century Notion of Signification (Brill) and of several articles on medieval epistemology, logic and philosophy of language. At present, she is the leader of a research project, funded by the Knut and Alice Wallenberg Foundation, about Aristotle’s Topics and its medieval reception.