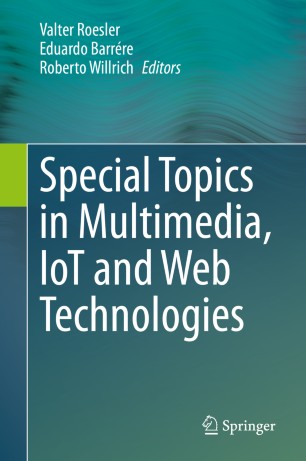 This book presents a set of recent advances that involve the areas of multimedia, IoT, and web technologies. These advances incorporate aspects of clouds, artificial intelligence, data analysis, user experience, and games. In this context, the work will bring the reader the opportunity to understand new possibilities of use and research in these areas. We think that this book is suitable for students (postgraduates and undergraduates) and lecturers on these specific topics. Professionals can also benefit from the book since some chapters work with practical aspects relevant to the industry.

Valter Roesler is an associate professor at the Federal University of Rio Grande do Sul (UFRGS), Brazil. He has a PhD degree (2003) and Master degree (1993) in Computer Science, and BSc in Electrical Engineering (1988). He coordinates the PRAV laboratory (Projects in Audio and Video) since 1998, and his interest areas are Multimedia, Computer Networks and eHealth.
Eduardo Barrere is a professor at the Federal University of Juiz de Fora (UFJF), Brazil. He has Ph.D. degree (1996) and Master degree in Systems Engineering and Computing (UFRJ). He coordinates the LapIC laboratory (Applications and Innovation in Computing), developing research in development and use multimedia applications and information retrieval in video.
Roberto Willrich received the B.S. and M.Sc. degrees in electrical engineering from the Federal University of Santa Catarina (UFSC), Florianopolis, Brazil, in 1988 and 1991, respectively, and the Ph.D. degree from Université Paul Sabatier, Toulouse, France, in 1996. Also, he was a visiting researcher at LAAS-CNRS in 2005-2006. He is currently a full professor of Computer Science with the UFSC. His research interests include recommender systems, knowledge systems, semantic Web, and annotation systems.