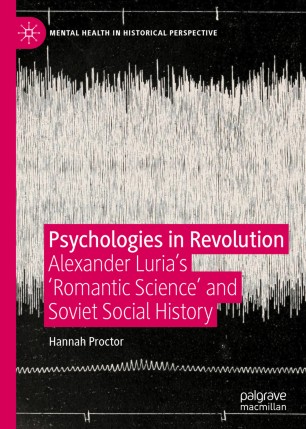 ‘This book carves out novel opportunities to analyse scientific and social history within the Soviet context, especially as it pertains to marginalised and under-researched communities. In the process, it deeply enriches our understanding of the Soviet psy-disciplines, convincingly demonstrating the links between Soviet psychology and the broader research community. Historians of science, medicine, and Eastern Europe more broadly can equally learn from Proctor’s work.’

This book situates the work of the Soviet psychologist and neurologist Alexander Luria (1902-1977) in its historical context and explores the 'romantic' approach to scientific writing developed in his case histories. Luria consistently asserted that human consciousness was formed by cultural and historical experience. He described psychology as the ‘science of social history’ and his ideas about subjectivity, cognition and mental health have a history of their own. Lines of mutual influence existed between Luria and his colleagues on the other side of the iron curtain, but Psychologies in Revolution also discusses Luria’s research in relation to Soviet history – from the October Revolution of 1917 through the collectivisation of agriculture and Stalinist purges of the 1930s to the Second World War and, finally, the relative stability of the Brezhnev era – foregrounding the often marginalised people with whom Luria’s clinical work brought him into contact. By historicising science and by focusing on a theoretical approach which itself emphasised the centrality of social and political factors for understanding human subjectivity, the book also seeks to contribute to current debates in the medical humanities.