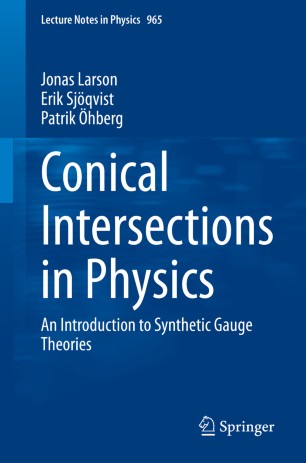 An Introduction to Synthetic Gauge Theories

This concise book introduces and discusses the basic theory of conical intersections with applications in atomic, molecular and condensed matter physics.

Conical intersections are linked to the energy of quantum systems. They can occur in any physical system characterized by both slow and fast degrees of freedom - such as e.g. the fast electrons and slow nuclei of a vibrating and rotating molecule - and are important when studying the evolution of quantum systems controlled by classical parameters. Furthermore, they play a relevant role for understanding the topological properties of condensed matter systems.

Conical intersections are associated with many interesting features, such as a breakdown of the Born-Oppenheimer approximation and the appearance of nontrivial artificial gauge structures, similar to the Aharonov-Bohm effect.

Some applications presented in this book include

- Molecular Systems: some molecules in nonlinear nuclear configurations undergo Jahn-Teller distortions under which the molecule lower their symmetry if the electronic states belong to a degenerate irreducible representation of the molecular point group.

- Solid State Physics: different types of Berry phases associated with conical intersections can be used to detect topologically nontrivial states of matter, such as topological insulators, Weyl semi-metals, as well as Majorana fermions in superconductors.

- Cold Atoms: the motion of cold atoms in slowly varying inhomogeneous laser fields is governed by artificial gauge fields that arise when averaging over the fast internal degrees of freedom of the atoms. These gauge fields can be Abelian or non-Abelian, which opens up the possibility to create analogs to various relativistic effects at low speed.

Jonas Larson is an associate professor at Stockholm University since 2015. He obtained his PhD in 2006 in the group of Stig Stenholm at the Royal Institute of Technology in Stockholm. During his PhD he focused on theoretical studies of cavity QED, and especially on extensions of the Jaynes-Cummings model. During a couple of years, both in Barcelona and in Cologne, he got interested in quantum many-body physics. Today he pursues research in various topics in quantum optics, such as cavity/circuit QED, cold atomic gases, open quantum systems, and quantum critical models.

Erik Sjöqvist is a professor in quantum information theory at Uppsala University since 2005. He received his doctoral degree at Uppsala University in 1995 and has been post-doc at University of Durham (UK), Oxford University (UK), and the Atomic Institute in Vienna during 1996-1999. He has been assistant professor 2000-2004 and a Visiting Research Professor at Centre for Quantum Technologies at NUS, Singapore. His main research interest concerns on various aspects of geometric and topological phases in quantum mechanics with particular focus on applications in quantum information.